Learn more
Size750mL Proof91.2 (45.6% ABV) *Please note that the ABV of this bottle may vary
This magnificent whisky, which earned 93 points from Whisky Advocate, was aged for over four decades in ex-Oloroso Sherry casks.
Notify me when this product is back in stock. 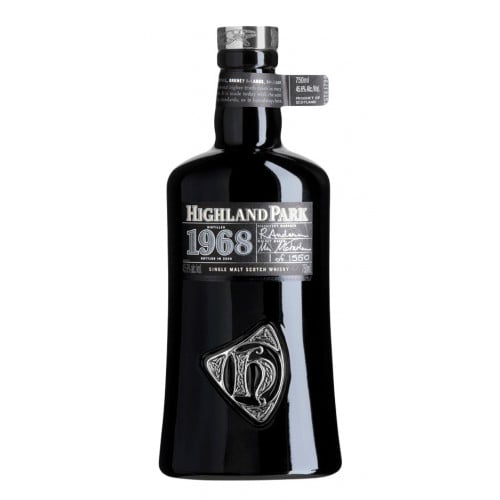 Today, over two centuries after its founding, Highland Park Distillery remains one of the few Scottish distilleries that continues to hand-turn, malt, and peat its own barley. “You have to be careful here on the malting floor,” says Eric Tait, Highland Park's Maltman. “You find it can get a wee bit slippery underneath. I have to turn the malt every eight hours to prevent the roots getting tangled and to get it all aerated properly. The airing also helps it to grow. The malt will be on the floor for seven days and I'm running five floors at the moment.”

Highland Park 1968 Year Old Single Malt Scotch Whisky is the second release in the esteemed Orcadian Vintage series. Crafted from just eight hogshead barrels which were previously used for maturing Oloroso Sherry, the whisky was bottled in 2009, allowing four decades of weather on the Orkney Islands to exert its influence over the whisky. With its aromatic, heather-infused peat flavor, Highland Park 1968 represents a unique combination of smoky and sweet that has not previously been seen from Highland Park.

Highland Park 1968 Year Old Single Malt Scotch Whisky has a bright, clean aroma of straw and salty sea air, which leads to a fruit-forward palate filled with lemon tart, plums, honey, cloves and just a hint of oak. The finish is equally compelling, with accents of toasted marshmallows and coconuts, as well as refreshing mint.

Only 1,550 bottles (at 91.2 proof) of this magnificent whisky, which earned 93 points from Whisky Advocate, were ever made. Pick up a bottle today!

Bright, clean aroma of straw and salty sea air, which leads to a fruit-forward palate filled with lemon tart, plums, honey, cloves and just a hint of oak. The finish is equally compelling, with accents of toasted marshmallows and coconuts, as well as refreshing mint.