Size750mL Proof119.5 (59.75% ABV) - may vary
This Distillers Cut single malt is a collection of several age statements, specially hand selected to achieve the perect harmony.
Notify me when this product is back in stock. 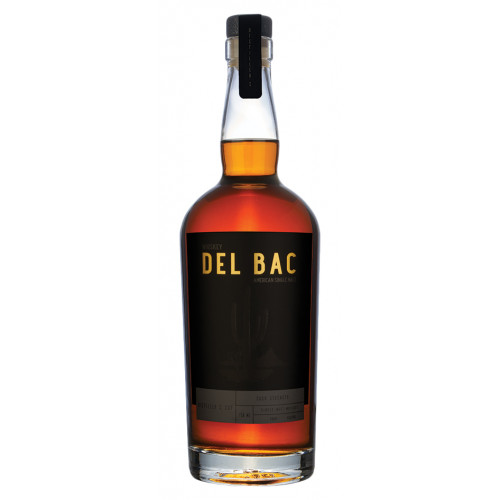 Del Bac was conceived while Stephen was drinking Scotch and barbecuing with mesquite scraps from his custom furniture company. The idea was born to malt barley over mesquite instead of peat. The result was a signature whiskey embodying the spirit of the American Southwest terroir. The unique whiskey was initially distilled using a 5-gallon alembic pot-still from Portugal. While perfecting the production process he learned how to malt barley, initially using a 6-row cattle-feed barley sourced from nearby Coolidge, AZ, later sourcing 2-row malting barley from Southern Colorado.

After graduating with a 40-gallon pot-still in 2011, Stephen and his daughter Amanda incorporated Hamilton Distillers in 2011. They expanded and re-vamped their facility incorporating a 500-gallon distillery and malt house to malt 5,000 lb batches using a tank system to steep, germinate, and dry the malt between two tanks, a system that allows for more control, yielding a better quality malt.

"We do everything right in-house.  We malt our own barley, and we mash, ferment, distill, barrel and bottle under one roof. After learning that so many "craft" or "artisan" American whiskeys actually come from the same mega distillery in Indiana, we are especially proud to say we do it all ourselves. It's as real as it could ever be"(producer).

For this "Distillers Cut," each cask was specially hand-selected to work in harmony. This expression is an exercise in the art of blending by utilizing varying malts, cask types and finishing methods, all to showcase cask strength single malt whiskey, giving the whiskey deeper more nuanced layers.

"Offered at cask-strength every time, Distillers Cut is a pure reflection of its makers and of the place from which it comes" (producer). For this first batch, the nose offers notes of bright citrus, dried stone fruit and herbs. The palate tastes of caramel toffee spice integrated with cherry, leather and sassafras. A lingering vanilla sweetness develops with its lengthy finish.