Size750mL Proof84 (42% ABV)
The Old Tom expression takes Aviation's signature gin for one year of aging in American white oak barrels that used to hold House Spirits' Westward Whiskey for 3 to 4 years, which results in a smoother, mellower spirit. 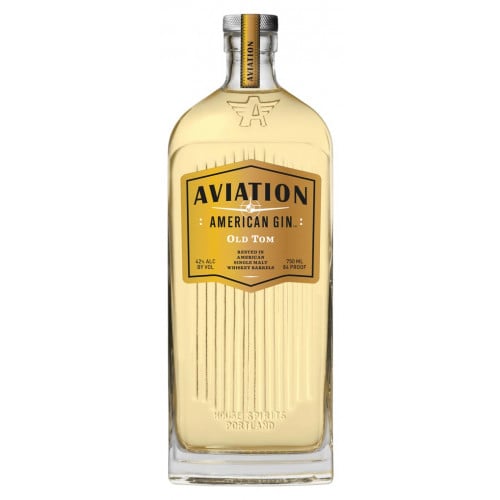 They experimented with over 30 different recipes before settling on the one that is produced today. The special gin was actually then named after the well-known pre-Prohibition cocktail, The Aviation. The famous cocktail was created in the early 1900s by well-known bartender Hugo Ensslin and is made with gin, maraschino liqueur, crème de violette, and lemon juice.

The distilled gin was originally bottled in a wine bottle with a blue label. The current bottle is shaped like a flask, inspired by the Art Deco period, adorned with a black label and a silver cap. Produced by House Spirits Distillery, the ratio for the recipe remains secret, but there are 8 known botanicals used during distillation: juniper, lavender, sweet and bitter orange peel, cardamom, coriander, Indian sarsaparilla, and anise seed.

The small-batch gin is pot-distilled twice and bottled at 42% ABV. The seven different natural botanicals that are used for flavoring are steeped in grain spirit for 48 hours, then redistilled in a custom-built 400-gallon pot still, one batch at a time. The spirit is then brought to proof with deionized Cascade mountain water before bottling. Aviation’s Master Distiller Christian Krogstad credits Aviation's natural ingredients, and low reflux stills, for Aviation's bright flavor. With a smooth juniper base, it has a subtle, clean finish.

Historically, an Old Tom is a sweeter style of gin that had sugar and flavorings added. The Old Tom variant of Aviation Gin has none of those, instead taking their spirit for one year of aging in American white oak barrels that used to hold House Spirits' Westward Whiskey for 3 to 4 years. This mellows the gin without detracting from its original flavor, making it perfect for sipping.

Aviation American Gin was first produced in Portland Oregon in 2006. The company was founded by distiller Christian Krogstad and bartender Ryan Magarian. These founders were the first recognized distiller/bartender partnership in the United States. Aviation American produces an American dry gin, which is known for its less juniper-forward flavor profile.

They experimented with over 30 different recipes before settling on the recipe that is produced today. The special gin was actually then named after the well-known pre-Prohibition cocktail, The Aviation. The famous cocktail was created in the early 1900s by well-known bartender Hugo Ensslin. This classic cocktail is made with gin, maraschino liqueur, crème de violette, and lemon juice.
Explore all Aviation bottles >>

The gin opens with juniper, vanilla, citrus, as well as floral and earthy notes. It's juniper-forward on the palate with an added caramel sweetness. Finishes crisp and clean with a touch of sweetness.