Size750mL Proof88 (44% ABV)
This classic London style gin is the one that placed Salcombe Gin onto the map. Juniper forward and luxurious, it has won a "Double Gold" award at the San Francisco World Spirits Competition.
Notify me when this product is back in stock. 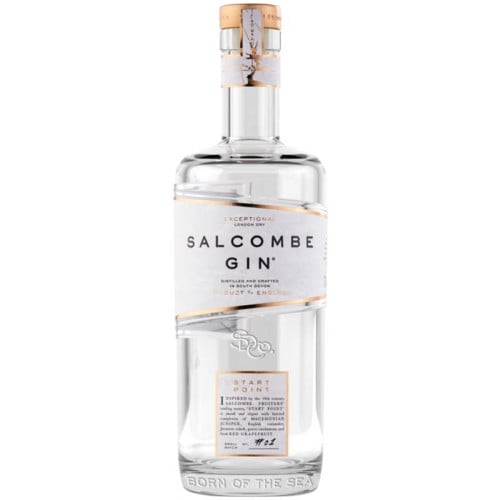 Salcombe is a town in southwest England. While it's mostly known as a tourist spot today, it has a rich history that involves smugglers and fishermen. In the 19th century, it was a bustling port town that played a large role in fruit trade and was known for its "Salcombe Fruiters", small schooners that were built for speed ― a crucial factor in the transportation of fresh fruit. Steamships took over the fruit trade at the turn of the century and it wasn't until 1951 that sailboats came back in full force with the founding of the Island Cruising Club. It's there that Salcombe Gin co-founders first met in 1995. The pair would end each day of sailing with a gin & tonic at the Salcombe Yacht Club, eventually finding a common interest in the distilling industry. It was in 2014 that the idea took the form of the Salcombe Distilling Co.

After months of experimentation, their first gin was born. Start Point is a London dry style spirit that was initially distilled using 60-liter copper pot stills. As the operation grew, the main still became a 450-liter one, nicknamed Provident. Today Salcombe Distilling operates their Boathouse distillery, a tasting bar, a yacht gin delivery service, and a gin school, with plans of launching a "distillery at sea" aboard the Iona. Their gins have garnered numerous awards, including the coveted "Double Gold" at the San Francisco World Spirits Competition.

Named after the Start Point lighthouse that greeted the fruit schooners as they set sail from the Salcombe port, this classic London dry gin takes inspiration from the exotic fruits, herbs, and spices that those ships would carry. The starting point that would launch Salcombe Gin into the award-winning distillery that it is today, it's a classic juniper-forward spirit in its most luxurious form. It's crafted with the soft and pure Dartmoor water and the finest botanicals including Macedonian juniper berries, red grapefruit peels, lemon, lime, coriander seed, cardamom, cubeb berries, licorice, and angelica root. Bottled at 88 proof, it's a versatile gin that has received a "Double Gold" award at the San Francisco World Spirits Competition.

The gin has a classic juniper-forward profile with plenty of fruity and zesty notes. Red grapefruit, pine, and spices are on the nose. The palate is rich with an earthiness and sweetness, finishing fresh and balanced with cardamom shining through.