Size750mL Proof86 (43% ABV)
Aged for over a quarter century exclusively in ex-bourbon casks, this is the newest release from Glenfiddich, one of the most esteemed Speyside distilleries.
Notify me when this product is back in stock. 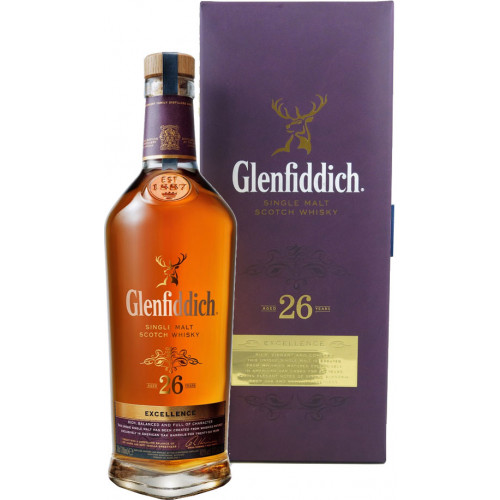 Glenfiddich Excellence 26 Year Old Single Malt Scotch Whisky was created to honor the distillery’s long, continuous line of family ownership since its founding by William Grant in 1887. Glenfiddich Age of Discovery is matured for over a quarter century exclusively in American Oak, ex-bourbon casks straight from Kentucky. The “Quercus Alba” wood used in these casks imparts subtle spices and vanilla notes throughout the aging process, and contributes to an overall soft and delicate whisky.

Glenfiddich Excellence 26 Year Old Single Malt Scotch Whisky has a rich golden color, along with an intense nose filled with apricots, orange blossoms and floral notes reminiscent of a fresh rain. The aroma gives way to a powerful body with honey, almonds, leather and fresh oak, and leads to a delicate and complex. Glenfiddich Age of Discovery earned the Gold Medal at the International Wine and Spirits Competition in 2013, and was just released to the United States.

“(Excellence) goes a little against preconceived notions of very old whiskies, which are more often associated with flavors like chocolate and coffee,” says brand ambassador Struan Grant Ralph. “This is very light, and shows a lot of subtle flavors.”

Rich golden color. Intense nose filled with apricots, orange blossoms and floral notes reminiscent of a fresh rain. Aroma gives way to a powerful body with honey, almonds, leather and fresh oak, and leads to a delicate and complex.