Caskers Rewards members earn up to 2 store points back when buying this bottle.
Size375mL Proof80 (40% ABV)
Made in collaboration with the Mount Vernon Ladies' Association, this rye whiskey is distilled according to George Washington's original recipe.
Notify me when this product is back in stock. 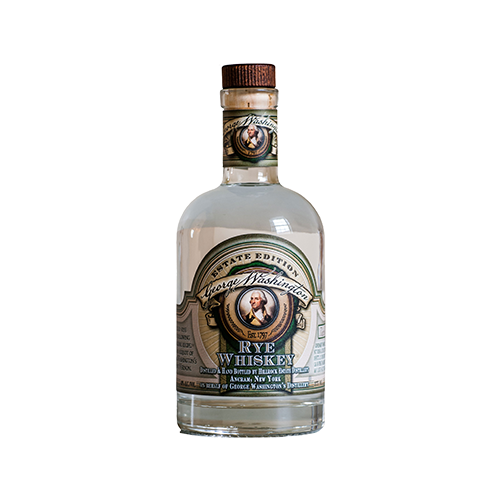 During his tenure as the first President of the United States, George Washington established the federal judiciary, organized the first Presidential cabinet and led an army into Pennsylvania in order to put down the whiskey rebellion. In 1797, Washington refused to run for a third term as President, and retired to his quiet countryside estate at Mount Vernon.

That same year, at the recommendation of his Scottish plantation manager, James Anderson, Washington installed a pair of small, copper-pot stills in order to distill his excess grains into whiskey. After a successful test-run, Washington built a large, two-story distillery on his estate to house the stills. In 1798, Washington distilled approximately 4,500 gallons of rye whiskey. In 1799, Washington distilled 11,000 gallons, likely making him the largest whiskey producer in the United States at the time. Washington's rye whiskey, which was never aged, was the largest source of revenue for his plantation.

By 2003, Washington's recipe for rye whiskey had been uncovered and his original distillery at Mount Vernon had been restored. That year, Master Distiller Dave Pickerell was selected to distill the first batch of George Washington Rye in two centuries (the stills have remained nearly silent ever since).

"It was inspiring to bring George Washington's Rye recipe to the Hillrock Estate Distillery," says Pickerell. "The historical and geographical connections made this an ideal collaboration. Similar to the General's rye, this new spirit is crystal clear with notes of spice and freshly harvested grain in the nose. The taste is slightly sweet with lots of traditional rye spiciness, and carries a warm and crisp finish."

Pay homage to the first President of the United States and pick up a bottle today!

Spicy nose with hints of rye and freshly cut grass. Warm notes of rye and baking spices that lead to a crisp and earthy finish.