Size750mL Proof124 (62% ABV)
There's nothing small about this Foursquare expression. Aged for 14 years in first, second, and third fill ex-bourbon barrels and bottled at 124 proof, it's among their oldest, heftiest rums. Complex and traditional, it showcases the best of Barbados.
Notify me when this product is back in stock. 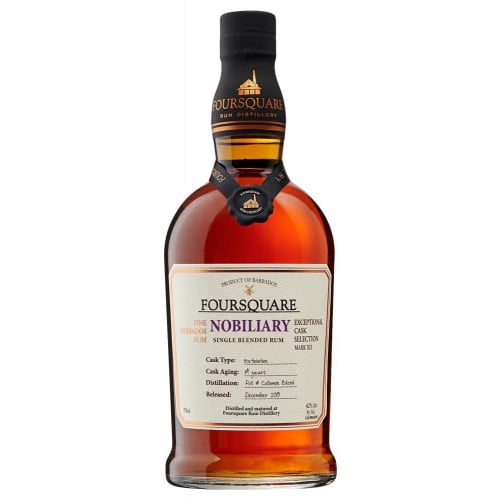 The history of Foursquare Rums begins in 1926, when the Seale family began sourcing rum from Barbados distilleries, blending and bottling them. Eventually, they acquired other brands up until the mid-1990s, when Richard Seale, the fifth generation in the family business, worked alongside his father to renovate an abandoned sugar factory. Today, the Foursquare Rum Distillery’s output rivals that of its neighbor Mount Gay Rum.

Foursquare Distillery, is situated in St. Philip, Barbados, is one of the steadfast supporters of Caribbean rum production. This particular release was created by 4th generation distiller Richard Seale (also known as the "Pappy of Rum"), as a tribute to an early period of rum production when it was transported in ex-sherry and port barrels.

The Mark XII "Nobiliary" expression from their Exceptional Cask Series is a single blended pot and column rum that was aged for 14 years in a combination of first, second, and third fill ex-bourbon barrels. It's one of the oldest rums to come out of the distillery, it's bottled unfiltered at 124 proof, has no color, sugar, or any additives. Coming from a series of Seale's personal projects where the sky is the limit, its exceptional quality should come as no surprise.