Size750mL Proof93 (46.5% ABV)
This unusual expression is built around FEW's award-winning Straight Rye Whiskey. The cask-strength rye is cut to 93 proof using the famous 8 Immortals oolong tea, which upgrades the sweet and spicy rye with fruity and creamy notes for a complex and delicious spirit.
Notify me when this product is back in stock. 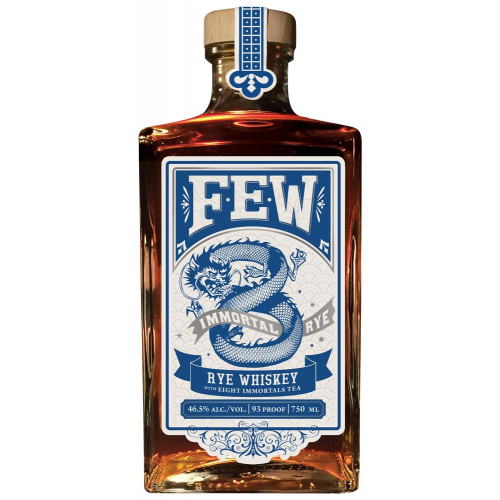 Founded in the Chicago suburb of Evanston, IL in 2011, FEW Spirits is a grain-to-glass distillery that crafts award-winning whiskey and gin, while constantly innovating and experimenting in order to bring surprising flavors to the discerning drinker. Evanston held the 1893 World's Fair, where the US was introduced to several modern inventions. The town was also known as the seat of Prohibition and would remain a dry community long after Prohibition was repealed in 1933. These 2 events became the inspiration that fueled the distiller Paul Hletko's vision of creating FEW Spirits, the first legal distillery ever to craft spirits in Evanston.

The ever-creative Hletko has always loved making new things, whether as an engineer, lawyer, or musician. "At the end of the day, I like to have created something that didn’t exist that morning and offers something completely different," says Hletko of the passion that drove him to open the distillery. With it he focused on creating urban whiskey that could rival that of his Kentucky friends ― with humble beginnings in an old chop shop. Now he crafts artisanal small-batch spirits using locally-sourced grains, ages them in American oak barrels and bottles on-site into US-made glass bottles. Hletko was named Distiller of the Year in 2018's edition of the Gin Magazine's "Icons of Gin" feature.

The FEW Immortal Rye expression is based on their award-winning grain-to-glass Straight Rye Whiskey that is aged in air-dried oak barrels. The cask-strength straight rye that has received a Double Gold medal at the San Francisco World Spirits Competition is then brought to proof with 8 Immortals oolong tea, resulting in a complex whiskey that retains its rye character and ramps up the complexity with fruity and creamy notes of the famous tea.

The rich profile mixes the signature FEW Rye spice notes with the 8 Immortals tea. There's notes of peach, honey, and dragon fruit, with the sweetness and spice of the rye shining through. Spicy, fruity, and creamy, it's a complex and delicious drink.