$45.99
Caskers Rewards members earn up to 2 store points back when buying this bottle.

Size750mL ProofGin: 87 (43.5% ABV); Spiced Rum: 86 (43% ABV)
Each of these premium, artisanal spirits is distilled from grain-to-glass at the northernmost distillery in the United States. 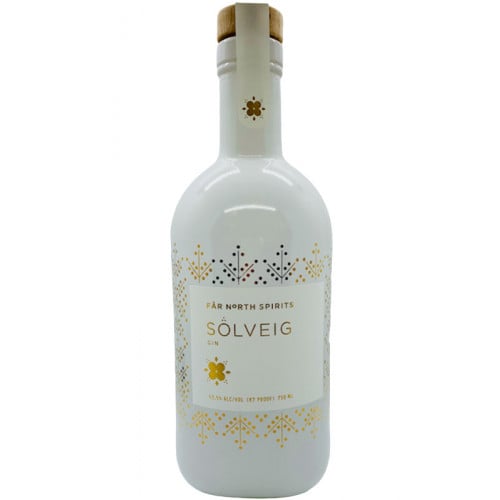 Far North Spirits is located on Swanson Farms, a working family farm set on 1,500 acres of Red River Valley jet-black soil in the northwest corner of Minnesota. Great Grandpa Gustav arrived in Minnesota back in 1917, and the land has been farmed by Swansons ever since — by his son Albert and Albert's son Charles. Now Michael, the fourth generation farmer in the family, plans to make Far North Spirits a large part of the farm's next 100 years. "Farming and distilling," Michael says, "are a marriage made in Minnesota. With its incredibly rich soil and farmer's pride in quality grains, Minnesota is certain to become a craft spirits destination."

Far North Spirits Solveig Gin is born of AC Hazlet Winter Rye, planted and harvested just steps from where the spirit is distilled. Pronounced \SOUL-vai\, Solveig is a traditional Scandinavian woman's name that combines the elements of sun (sol) and strength (veig) — reflecting the ethereal lightness of the gin's character. Although most gin is produced by distilling all botanicals at once in a single run, Solveig Gin is made by distilling each botanical individually to capture its best attributes. Distillations are then blended together to create the final spirit. Far North is committed to this more labor-intensive process as it results in a truly superior gin with greater depth and character. The gin itself has a nose of citrus, pine cones and lavender, which combine for a creamy entry onto the palate. The gin shows exceptional balance on the mid-palate, with added flavors of thyme and coriander, before finishing with rich, persistent notes of black olives and fresh grain.

Far North Spirits Alander Spiced Rum, which takes its name from an idyllic chain of islands located in the northern Baltic, is made from a blend of Louisiana Turbinado and Florida Demerara sugar cane. All spices, including Madagascar and Tahitian vanilla beans, nutmeg, cinnamon, allspice and cloves, as well as espresso roasted by PEACE COFFEE in Minneapolis, are purchased whole before being infused into the rum. This natural process leads to a deliciously smooth rum with bold aromas of pumpkin pie and cinnamon on the nose, melting into vanilla on the palate. The finish is long and full, with a just a hint of espresso.

Less than 2,000 cases of each were produced in Far North Spirits first production run, and the bottles themselves were Made in France and decorated in Montreal. Pick up two definitive craft spirits from the country's northernmost distillery today!

Gin: Nose of citrus, pine cones and lavender, which combine into a creamy entry on the palate. Exceptional balance on the mid-palate, with added flavors of thyme and coriander. Finish is rich and persistent, with notes of black olives and fresh grain.