Size750mL Proof114 (57% ABV)
This 114-proof Navy Strength Gin is crafted in the US using a two-step process that combines traditional and modern, scientific distilling methods. The first batch of botanicals is added via vapor infusion, while the second employs vacuum distillation at room temperature.
Notify me when this product is back in stock. 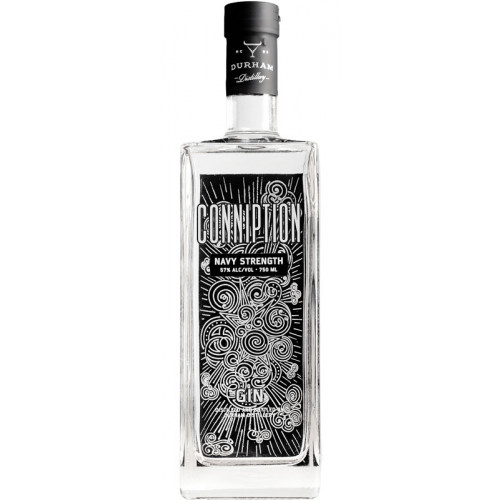 The Durham Distillery has received countless awards for their lineup of gins, including its Conniption Navy Strength Gin. Like the other expressions, it's crafted with a special two-step process that combines traditional distilling techniques with a modern approach. Thus, the first batch of botanicals is added using vapor distillation on their German pot still. Juniper, Indian coriander, cardamom, caraway, bay leaf, rosemary, and lemon peel all get the traditional treatment. Then, figs are vacuum-distilled at room temperature, resulting in an aromatic and powerful expression that's bottled at 114 proof. The gin was named "Best Navy Strength Gin in the US" for 4 consecutive years at the World Gin Awards.

Get your bottle of this US-made navy strength gin today!

Aromatic and intense, the gin opens with pine forest aromas of juniper, as well as spice, and savory undertones. The palate is balanced with juniper, rosemary, and rye bread notes, culminating in a smooth finish with lingering fig notes.