Size375mL Proof84 (42%ABV)
With a 150-year history of distilling, the family-run Etter crafts delicious spirits. Made with fully-ripened Williams pears from the Wallis region of Switzerland, each bottle of this brandy takes 11kg of the small, yellow variant of the fruit to produce.
Notify me when this product is back in stock. 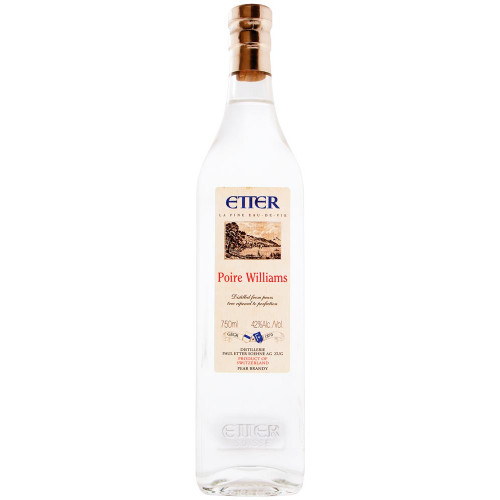 The history of Etter goes back to 1823 when Swiff farmer Johan Baptist Etter began distilling cherries from his own trees on the side. Some 50 years later Paul Etter opened the doors of an industrial distillery in Zug. The operation kept growing, with a new distillery being built in 1926 on the town's outskirts. Today the distillery is on its third incarnation, a modern plant that was built in 1980. With the new plant came new expressions and Etter diversified from producing cherry-based spirits to several other types of fruit.

Today the distillery is in their fourth generation of Etters with Eveline and Gabriel Galliker-Etter running the operation with a rich tradition and the same passion that has been in the family for more than a century. They have celebrated their 150th anniversary in 2020 and offer a wide range of pip & stone fruit brandy, liqueur, grappa, and even whisky and rum.

They have found the smaller, fully-ripened pears from the right bank of the Rhône to be the best kind, collaborating with the same trusted suppliers for years. Each bottle of Etter Pear Williams takes 11kg of these Williams pears from the Wallis region. After 8 to 10 weeks of fermentation, they begin the distillation process, collecting only the heart of the distillate. A perfect digestif or aperitif, this fruity brandy matures for 6 to 12 months in stainless-steel tanks.

The crystal-clear brandy opens with a gentle, rich, and refreshing fruity aroma. It's balanced and clean on the palate with prominent pear. Finishes warm with lingering fruit notes.