Size750mL Proof80 (40% ABV)
This rum is distilled from organic, unprocessed sugar grown in the foothills of the Himalayas and then aged in new American oak casks.
Notify me when this product is back in stock. 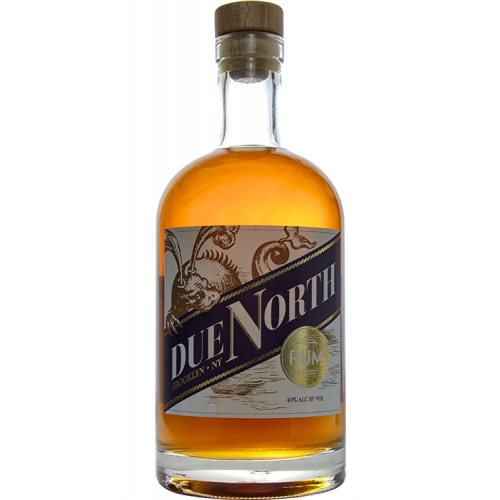 About Due North Rum

During the 17th century, Cornelius Van Brunt — one of the founding fathers of Brooklyn — farmed land alongside the banks of Gowanus Creek, while helping forge the eclectic society that became Brooklyn. In the 1800s, as the population of New York mushroomed and its waterways became major hubs for maritime travel, the Brooklyn waterfront became home to a number of gin, rum and whiskey distilleries.

At the time, sailors at sea were afforded a ration of rum everyday. Disciplinary problems ensued when sailors began hoarding their rations for several days and consuming all their rum at once. As a result, the daily rations of rum were mixed with water in order to dilute the effects of the alcohol; the resulting mixture was called grog. If the sailors performed valiantly during battle or were in for heavy weather, the captain would distribute stronger rations. When the ration was pure rum, the sailors would say it was "Due North."

Van Brunt Stillhouse honors the pioneering spirit of Cornelius Van Brunt and the sailors who were forced to endure grog with Due North Rum. "I love the history of rum," said Daric Schlesselman, owner and master distiller of Van Brunt Stillhouse. "It was a huge part of the economy in the pre-Colonial northeast, not to mention the standard drink aboard the ships that sailed to and from Brooklyn."

New York City's first small-batch rum distillery since Prohibition, Due North is distilled from organic, unprocessed sugar grown by a small family of farmers in the foothills of the Himalayas, and sun-dried using an Ayurvedic (or ancient Hindu) process. After the sugar and yeast are poured by hand into tanks and allowed to ferment, the wash is then distilled inside a 125 gallon handmade copper-pot still. After distillation, the rum is allowed to age in new American oak casks for approximately four months, before Schlesselman fills and labels each bottle by hand.

It took five years of planning and experimentation, along with training sessions at distilleries in Scotland and in the United States, before Schlesselman was able to perfect the recipe for Due North Rum. With notes of caramel, vanilla and sweet spice, plus hints of dried fruit, Due North is a testament to its Brooklyn origins.

"I love television," says Schlesselman, who is also an editor of The Daily Show with Jon Stewart. "But I love rum more."

Aroma of caramel and vanilla on the nose. Initial notes of honey, milk chocolate and caramel, with hints of dried fruit on the lingering finish.