Size750mL Proof80 (40% ABV)
This award-winning vodka kickstarted the family-run Du Nord operation. The craft vodka is made from locally-sourced corn and sugar beets and has a delicate, crisp, and smooth profile that is perfect for sipping or citrusy cocktails.
Notify me when this product is back in stock. 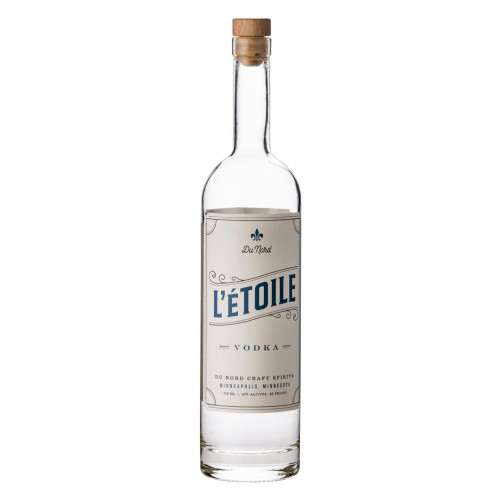 Du Nord is the brainchild of Chris Montana, who decided to open a distillery in his home city of Minneapolis in 2013. It's a family-run operation that combines Chris' city-smarts with Shanelle Montana's country spirit. The craft spirits company has since grown considerably from a garage-type distilling project and works to bring minorities and members of underrepresented communities into their family.

They offer tours of the Du Nord distillery and operate a Du Nord Cocktail room on the premises. Their lineup currently consists of the Du Nord L'Etoile sipping vodka, Fitzgerald Gin (a London dry and old world style hybrid), Apple Du Nord apple liqueur, Café Frieda coffee liqueur, and Du Nord Mixed Blood Blended Whiskey. Each and every one of these has garnered awards from some of the most prestigious spirits competitions.

Du Nord L'Etoile Vodka takes its name from Minnesota's motto which translates to "The Star of the North". Made from Minnesota sugar beets and corn from Shanelle Montana's family farm, it goes through 2 stills and 20 rectifying plates, before being charcoal filtered. The vodka was crafted with sipping in mind but works particularly well with citrusy cocktails as well. It has won several awards, including a Triple Gold at the MicroLiquor Spirits Awards and a Bronze Medal at the San Francisco World Spirits Competition.

This sipping vodka is has a well-balanced, crisp, delicate, and smooth profile. A subtle sweetness is present along with gentle stone fruit notes and a hint of earthiness. Finishes super clean and creamy.