Size750mL Proof90 (45% ABV)
Made with locally-sourced grains, Dad's Hat Pennsylvania Rye Whiskey is aged for just under a year in quarter casks in a temperature-controlled barrelhouse, and was named the Craft Whisky of the Year by Whisky Advocate in December 2015.
Notify me when this product is back in stock. 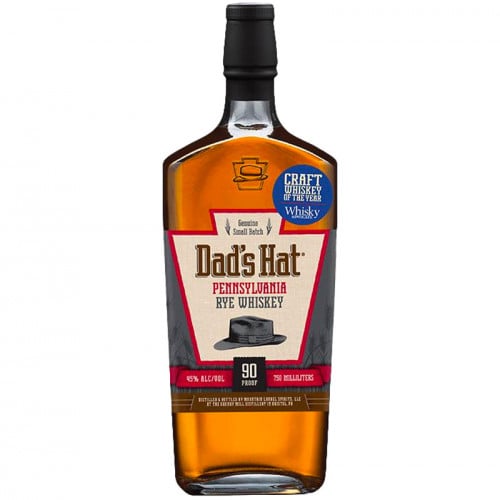 After distillation, Dad's Hat Pennsylvania Rye is aged in charred, white oak quarter casks (15-gallon casks) for just under one year in a temperature-controlled warehouse. The small casks and climate-controlled aging give the whiskey hints of cinnamon, dried fruits, nuts and candied apple, which nicely balance out the flavor of the spicy rye.

After maturing, each cask of Dad's Hat Rye Whiskey is brought to proof and bottled by hand.

Inspired by the old-fashioned fedora hats his father used to purchase in Philadelphia, Mihalich's goal was to recreate the sentiment that these hats represented with Dad's Hat Whiskey: quality, tradition and integrity. Try a quality, traditional rye whiskey today!