Size750mL Proof80 (40% ABV)
Aged for four years in Jequitiba wood barrels, this Cachaça is made from organic, estate-grown sugarcane.
Notify me when this product is back in stock. 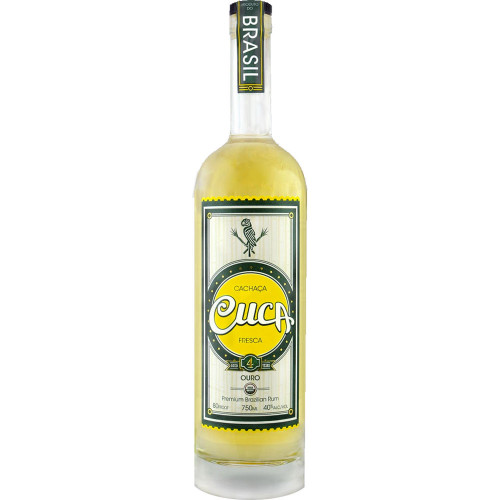 During the 17th century, the Madeira archipelago (situated just 200 miles north of the Canary Islands off the coast of Africa) was a major exporter of sugar and sugar cane to much of Portugal and Western Europe. As Algerian pirates began raiding European cargo ships in the late 18th century, however, and Napoleon plunged Europe into a series of wars beginning in 1803, the waters off the coast of the Madeira archipelago became too dangerous to navigate. As a result, the production of sugar cane, as well as Cachaça — a spirit distilled from sugar cane — shifted from Madeira to Brazil. Since then, Cachaça has become the most popular spirit in Brazil and the third most-popular spirit in the world.

Cuca Fresca Ouro Cachaça is made from 100% organic, estate-grown sugarcane harvested in Minas Gerais, Brazil's most famous Cachaça producing region. After the stalks of the sugarcane grow as high 12 feet, expert farmers tenderly harvest the crops by hand using a machete (no flame-harvesting is used during the process). "We believe in using the highest quality sugar cane," says Phoenix Kelly-Rappa, the Managing Partner of Cuca Fresca. "It's never burned, as some sugar cane is. That's one of the things that makes Cuca Fresca extremely smooth. It has a fresher, spicier taste to it, much lighter than rums from the Caribbean that are made from molasses."

After being harvested, the sugarcane is then pressed at the distillery and the resulting juice is slowly fermented using a four-generation old Cachaça recipe. Following fermentation, the wash is double-distilled through an alambique, artisanal copper pot still. Cuca Fresca Ouro Cachaça is then aged for four years in Jequitiba wood barrels, giving the Cachaça notes of baked bananas and dried fruits. "We use all artisanal methods with no mass production," notes Kelly-Rappa, of Cuca Fresca Ouro. After the cachaça is brought to proof, it is triple filtered before each bottle is filled and labeled.

"Cuca Fresca, "which literally translates to "cool head, "is a Brazilian expression meaning "to be relaxed "or "relaxation. "Try a bottle of this cachaça and achieve cuca fresca today!