Size750mL Proof86.8 (43.4% ABV)
This limited-release expression builds upon Hendrick's signature base. Inspired by the sea, the gin is infused with a blend of locally-sourced coastal botanicals such as coastal thyme and lime.
Notify me when this product is back in stock. 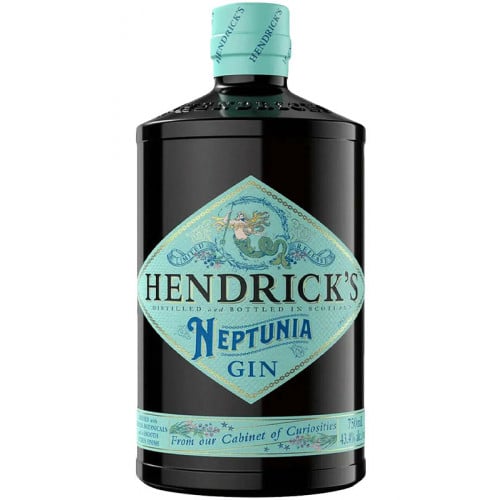 Hendrick’s Gin is made in small batches of 500-liters or less, with both the Bennett and Carter-Head stills working their magic on Hendrick’s unique mix of botanicals, which include yarrow, elderflower, juniper, angelica root, orange peel, caraway, coriander, chamomile, cubeb berry, orris root, and lemon. After distillation, Hendrick’s Gin is infused with Bulgarian Rosa Damascena and specially selected cucumbers — an odd combination that produces miraculous results.

Hendrick's Neptunia Gin is a limited-release expression that takes its inspiration from the sea and coastal air. Naturally, this means that the spirit is infused with a blend of locally-sourced coastal botanicals such as coastal thyme and lime. Together with rose, cucumber, and 11 other plants, this elevates the signature Hendrick's base with crisp citrusy notes, coastal herbs, and depth of flavor from the sea botanicals. Most of my creations are based on memories – I play around with botanicals and combine them to recreate certain sensations. Hendrick’s NEPTUNIA for me is that freeing feeling of the sea bottled in a gin," says Master Distiller Lesley Gracie. The gin is bottled at 86.8 proof.

Get your bottle of this coastal gin today!

The nose is fruity and herbal with pine, berry, citrus, and floral aromas. The palate is equally citrusy, floral, and pleasantly sweet with warm spice and a touch of brine. The finish is crisp and bright with citrus, floral, and spice notes.