Size750mL Proof92 (46% ABV)
This American whiskey, which is mesquite smoked rather than peated, earned a score of 94 points at the 2015 Ultimate Spirits Challenge.
Notify me when this product is back in stock. 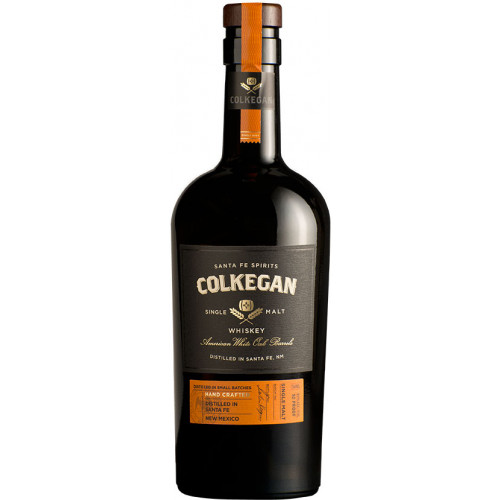 In 1990, Colin Keegan left his native country of England and moved to the British Virgin Islands with his wife, Suzette, and their daughter Phoebe. It was there, while continuing his successful career as an architect, that Colin realized his dream of living on a traditional farming community in the Southwest, and shortly thereafter Colin and his family moved once again to a mature apple orchard in Tesuque, New Mexico.

The abundance of apple cider each season gave Colin an idea, and in 2010, Colin left his job as an architect to create Santa Fe Spirits. At first, Colin focused on distilling the excess apple cider into apple brandy, and after some initial success, he expanded his business into gin, vodka and whiskey, all of which have a distinctly Southwestern flavor.

Colkegan Single Malt Whiskey is made with 100% malted barley, which is mesquite smoked — Scotch whiskey is traditionally smoked over a peat flame, rather than wood chips — to give it a distinctly Southwestern flavor. The whiskey is then aged for a minimum of two years in a combination of new American oak and ex-bourbon barrels before being bottled by hand and individually numbered.

As a result of this process, Colkegan Single Malt Whiskey has a sweet nose, with white chocolate, berries and marzipan being balanced by subtle floral notes. On the palate, there is a real smoky character, including notes of hickory wood, rhubarb, black currant and bitter cherries. The finish is smooth and chewy, and leaves a lasting impression.

Colkegan Single Malt Whiskey earned a score of 94 points at the 2015 Ultimate Spirits Challenge, the second-highest score among all American whiskies.

“It’s really exciting to be recognized in that category,” Santa Fe Spirits Head Distiller Johnny Jeffery said. “It’s the second highest scoring in the American whiskey category. To have recognition in a national forum where spirit connoisseurs go to see what they should be drinking is exciting.”

Sweet nose, with white chocolate, berries and marzipan being balanced by subtle floral notes. On the palate, there is a real smoky character, including notes of hickory wood, rhubarb, black currant and bitter cherries. Finish is smooth and chewy, and leaves a lasting impression.