Note: Packaging may vary.
Aged up to five years in ex-bourbon casks sourced from Kentucky, this rum was recently made available in the U.S. for the first time.
Notify me when this product is back in stock. 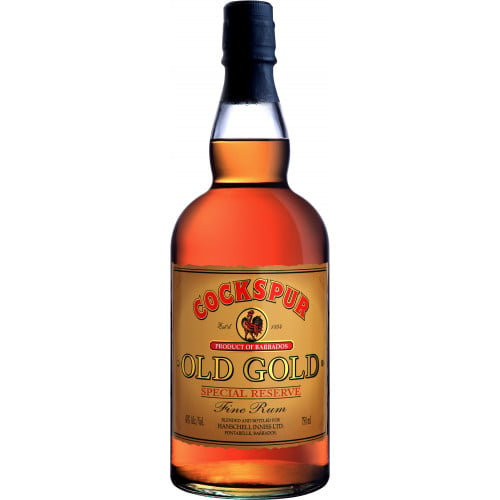 After harvesting fresh Caribbean sugar cane, Rhett Harris, master distiller at the West Indies Rum Distillery, crushes the sugar cane in order to extract its pulp, which is turned into molasses. The molasses is then steeped in water sourced from coral-filtered underground springs in Barbados and fermented using a rare culture of yeast that was specifically developed for the production of Cockspur Rum.

Following a fermentation period of 48 hours, the wash is distilled through one of Cockspur's four stills. In Barbados distilleries are required to apply for a license to operate a still and are granted a license number upon approval of their application. The West Indies Rum Distillery operates Stills 62, 73, 77 and 79. Stills 62 and 73 are traditional copper pot stills, while Stills 77 and 79 are four-column stills.

Cockspur Old Gold Special Reserve Fine Rum, recently made available in the U.S. for the first time, is aged for up to five years in said casks. The casks impart a reddish copper color unto the rum, along with aromas of orange zest, dark chocolate, prunes and sandalwood. The palate morphs into flavors of coffee, raisins, caramel, vanilla and allspice, and leads to a dry finish marked by notes of cherry wood and pepper.

Reddish copper color, along with aromas of orange zest, dark chocolate, prunes and sandalwood. The palate morphs into flavors of coffee, raisins, caramel, vanilla and allspice, and leads to a dry finish marked by notes of cherry wood and pepper.