Size750mL Proof80 (40% ABV)
El Salvador’s first rum, this spirit is handcrafted by 100% by Salvadoran hands, earning Double Gold at from Fifty Best New York in 2017.
Notify me when this product is back in stock. 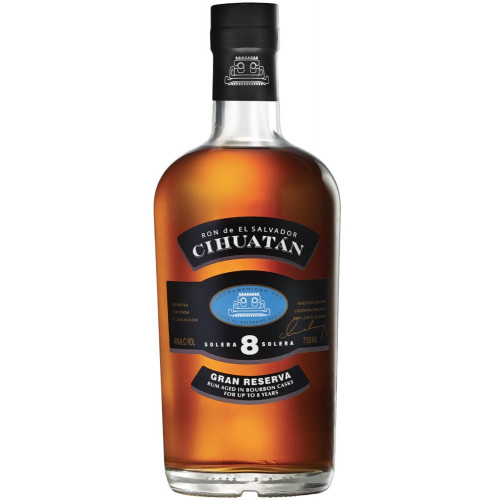 Ron Cihuatán’s story dates all the way back to the ancient Mayan city of Cihuatán. According to legend, a Goddess bestowed Cihuatán with riches and fertility, her spirit watching over the sugarcane fields, remaining in the shape of the Guazapa Mountain. This El Salvadorian rum is named after this legend, which in Nahuat “Cihuatán” translates “the land beside the sleeping woman.”

Produced by Licorera Cihuatán, a subsidiary of Ingenio La Cabaña of El Salvador. This rum is made using a 100-year-old sugar cane mill. Licorera Cihuatán distillery was established in 2004 and began distilling and aging their rums. After fermentation the rum is aged in used American oak bourbon barrels using the Solera method.

El Salvador’s first rum, this spirit is handcrafted by 100% by Salvadoran hands. “Our rum’s mystical surroundings, our sugarcane and aging methods, mixed with our hard work and patience, give Ron Cihuatán 8 Years an unmistakable quality you can easily taste” (producer).