Size700mL Proof99.2 (49.6% ABV)
Distilled in 1991 and bottled in 2021, this lowland Scotch whisky has spent 3 decades in ex-bourbon casks. Bottled at cask strength, the single cask yielded a total of 547 bottles.
Notify me when this product is back in stock. 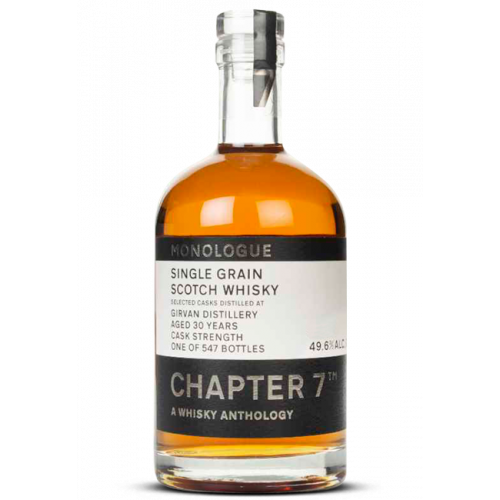 Chapter 7 has three series of expressions: Monologue, Anecdote, and Chronicle. The first are unique single casks, the second once-in-a-lifetime small batches or married atypical whiskies, the third has their aging reserves. The Monologue 30 Year Old Girvan was distilled in 1991 and bottled in 2021, after spending 3 decades in ex-bourbon barrels. This single cask of lowland single grain Scotch whisky yielded a total of 547 bottles. It's a cask-strength 99.2-proof spirit with a delicious balance of creamy vanilla, fruit, oak, dried fruit, and spice notes.

Grab one of only 547 bottles of this lowland whisky today!

You can expect creamy vanilla, dried fruit, toffee, and oak aromas. On the palate, you'll find more dried fruit with raisin, sultana, and tropical touches along with cereal and honey. The finish has a distinct nutty note along with oak and spice.