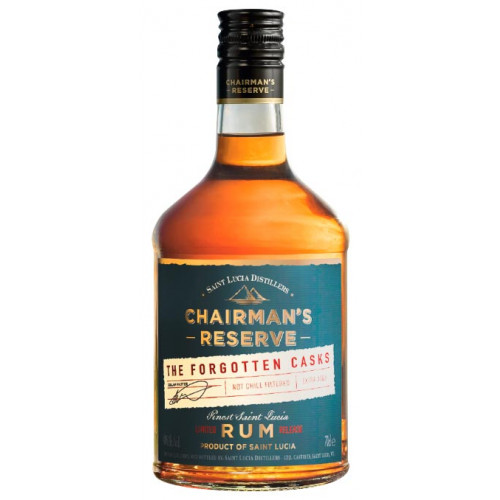 The Barnard family settled in St. Lucia in the 1930s, founding their rum distillery, producing handcrafted spirits distilled from molasses crafted from sugar sourced from the island’s massive sugar plantations. After the rise of the European sugar beet drove the local sugar industry to extinction, the rum trade was adversely affected.

The only remaining distilleries were consolidated into St. Lucia Distillers, based out of the picturesque Roseau Valley. The last sugar plantation was closed in the 1960s forcing rum producers to source their molasses from Guyana. The Forgotten Casks is an extra-aged limited edition rum inspired by the original forgotten casks of Chairman’s Reserve that survived St. Lucia Distillers devastating fire on May 2, 2007.

The cellar master was forced to find storage for the rum barrels, placing them in unusual places throughout the facility during the rehabilitation of the distillery. As a result, these casks were misplaced. The forgotten casks contained rum too mature for the original Chairman’s Reserve blend. It was decided to release the rum as an extra aged Chairman’s Reserve, which received worldwide acclaim. “St. Lucia Distillers continues to hold back select Chairman’s Reserve for extra aging to offer a limited release of the Chairman’s Forgotten Casks” (producer).

This mature blend is a mixture of Coffey and pot still rums, aged between six and eleven years, separately by batch and by type of still in ex-Bourbon barrels. The spirit is then blended and rested in oak vats for an additional six months to finish. This exquisite rum received 93 Points, Excellent Highly Recommend, at the 2017 Ultimate Spirits Challenge, a Gold medal at the 2017 International Review of Spirits and was a Finalist at the 2017 Ultimate Spirits Challenge.