Learn more
Size750mL Proof80 (40% ABV) *Please note that the ABV of this bottle may vary
This single malt won Best American Craft Whiskey at the 2016 New York World Wine & Spirits Competition.
Notify me when this product is back in stock. 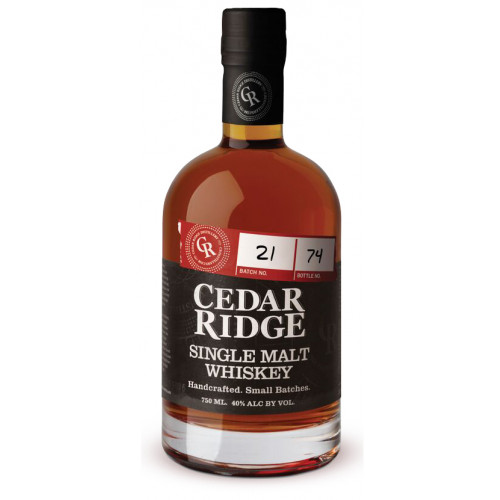 The whiskey is then transferred to barrels, where they allow the spirit to mature naturally, being stored in a non-temperature controlled rick house. Iowa’s inconsistent weather patterns are what aids in the expansion and contraction of the barrels, allowing the whiskey to absorb the rich aromas and flavors more quickly than in other regions. This natural aging process, however, leaves about 18% to the angels.

Cedar Ridge Single Malt Whiskey is aged in wine barrels, yielding a rich spirit full of character. “Because we are a winery AND a distillery, naturally we have an abundance of wine barrels. We chose to go with a more fruit-forward recipe for our new Single Malt to really utilize the depth of flavors we have created within our wine barrels,” states Production Manager, Kolin Brighton. Winner of Best American Craft Whiskey at the 2016 New York World Wine & Spirits Competition.

The nose has strong notes of caramel apples and nutty aromas. The palate is smooth, compelling and complex, with wine-forward notes. On the finish is a more spicy character.