Learn more
Size750mL Proof92 (46% ABV)
Gaelic for “Smoky," Toiteach is a peated Bunnahabhain expression, from a distiller of traditionally unpeated Islay whiskies.
Notify me when this product is back in stock. 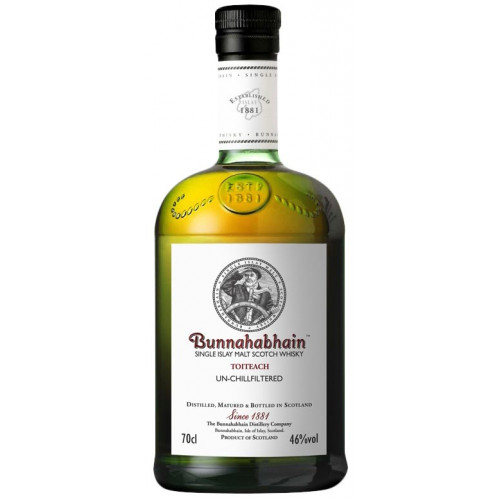 Bunnahabhain Single Malt Scotch Whisky is made from fresh Optic barley, which is lightly peated to approximately 3 phenol parts per million. Once the barley arrives at the distillery, it is milled and mashed with pure spring water drawn from the Margadale River. The water, which travels through an ancient bed of limestone, is transported by pipeline to the distillery and as a result, avoids traveling through the peat bogs of Islay.

Once the barley has been mashed, it is fermented in washbacks made of Oregon Pine for nearly three days. While wooden washbacks are more expensive and difficult to maintain as compared to stainless steel washbacks, they absorb a portion of the heat generated during the fermentation process and thus, create a lighter and richer whisky. Following fermentation, the wash is distilled twice, first through Bunnahabhain's copper-pot wash still and again through its copper-pot spirit still. Then, the heads and tails of the distillate are removed by Robin Morton, Bunnahabhain's stillman (Morton began working at the distillery in 1978), before the whisky is allowed to mature at Bunnahabhain's warehouse.

The sea-facing warehouse, which rests on the banks of the Sound of Islay, enjoys a cool, salty breeze that adds a touch of salt to the whisky as it ages. "Over the years, you get this slight salty taste," says Andrew Brown, Bunnahabhain's distillery manager. "The older the whisky gets, the saltier it becomes. It's not overpowering — it's just a hint.”

”Distinct from that of other Bunnahabhain single malts famous for their welcoming taste, Toiteach (meaning smoky in Scots Gaelic), is a delicious, peaty whisky. This bottling offers the connoisseur an opportunity to try something truly unique. The liquid has been masterfully distilled and quietly matured at the distillery, never for a moment leaving Islay during this process” (Bunnahabhain).

The nose tells the tale of a charming subtle peatiness with prickling strength emanating from the dram. The taste has immediate warming flavors drifting towards a slightly sweet sherry influence with delicate peppery notes. The finish has a good robust length with an extremely pleasant aftertaste.