Learn more
Size375mL Proof90 (45% ABV) *Please note that the ABV of this bottle may vary
Bulleit Rye earned the Double Gold and Gold Medals at the San Francisco World Spirits Competition, a score of 95 points as well as Extraordinary, Ultimate Recommendation from the Ultimate Spirits Challenge in 2014. It achieved Liquid Gold Award and a score of 96 in Jim Murray’s Whisky Bible 2018. 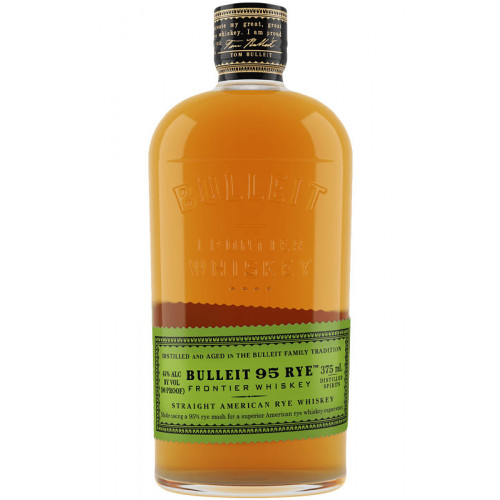 Bulleit Straight Rye Mash Whiskey is made from pure Kentucky limestone-filtered water and locally sourced ingredients. Bulleit Rye is crafted from a mash of 95% rye grains and 5% malted barley. Much like the bourbon, the grains are fermented with a unique strain of family yeast and distilled through a copper still. Following distillation, the rye is aged for five to six years in heavily charred, new American oak casks.

The rye has a burnished bronze color, along with rich oaky aromas. The aroma gives way to notes of citrus, vanilla, honey and spicy oak. The finish is clean, spicy and crisp, with a hint of caramel and vanilla. The spicy finish, created by the high rye content, is perfect for classic cocktails, such as Sazerac, The Manhattan and Old Fashioned.

Bulleit Rye earned the Double Gold and Gold Medals at the San Francisco World Spirits Competition, a score of 95 points as well as "Extraordinary, Ultimate Recommendation" from the Ultimate Spirits Challenge in 2014. It achieved Liquid Gold Award and a score of 96 in Jim Murray’s Whisky Bible 2018.

"There's a difference between aging and maturity, and we'll never bottle whiskey until it's ready to reach the customer," says Bulleit.

Burnished bronze color, along with rich oaky aromas. The aroma gives way to notes of citrus, vanilla, honey and spicy oak. The finish is clean, spicy and crisp, with a hint of caramel and vanilla.