Size750mL Proof90 (45% ABV)
This bourbon, which is aged for a minimum of eight years, is the flagship product of America’s oldest continuously operating distillery. 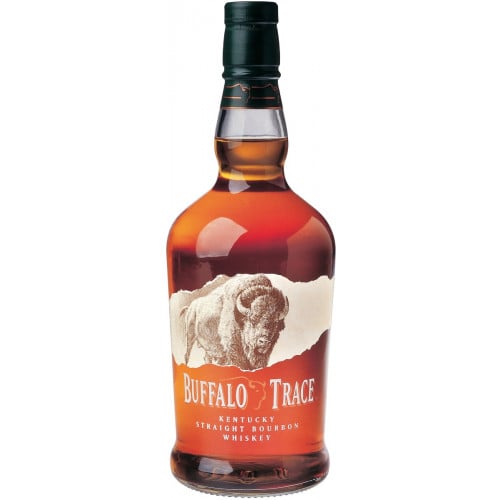 Situated on the Kentucky River in Frankfort, Kentucky, Buffalo Trace Distillery takes its name from an ancient pathway that migrating buffalo used when travelling westward. The trail was well-known among Native Americans and was eventually used by pioneering settlers who crossed the Ohio River and followed the buffalo trace to the Western frontier.

Buffalo Trace Distillery is the oldest continually operating distillery in the United States, and includes the rich legacies of master distillers such as E.H. Taylor, Jr, George T. Stagg, Albert B. Blanton, Orville Schupp and Elmer T. Lee. Today, the distillery is still family-owned, operating on the same 130 acres of land adjacent the Kentucky River as it has for over 200 years.

Similarly, the distillery’s flagship bourbon has been made using the same process for over 200 years. Buffalo Trace Kentucky Straight Bourbon Whiskey is made from a mash of yellow #2 dent corn, plump rye grains and malted barley, which is cooked and cooled before being fermented for approximately 3-5 days. Once fermentation is complete, the bourbon is double-distilled through column stills before being aged in first-fill, American oak barrels (90% of the distillery’s oak is brought in from the Ozark Mountains) that have been aged for six months in the distillery’s yard before being heavily charred.

Buffalo Trace Kentucky Straight Bourbon Whiskey has a deep amber color, along with an aroma of vanilla, caramel, mint and molasses. The palate offers sweet notes of brown sugar and toffee, which give way to oak, dark fruits, baking spices and anise. The finish is both mellow and complex, with lingering notes of vanilla, oak and rock candy.

4.9 out of 5
(34 reviews)
Write a review
Real email address is required to social networks
Sign in
Login with Google
Login with Facebook
Or
We also recommend