Learn more
Size750mL Proof98.4 (49.2% ABV) *Please note that the ABV of this bottle may vary
This highly anticipated 5th release of the mystic single malt is just as enigmatic as the last. Bruichladdich’s Head Distiller, Adam Hannett, has formulated an entirely new secret recipe that is more traditional, with less wine influence. Explore the true craft of a Head Distiller with Black Art 5.01.
Notify me when this product is back in stock. 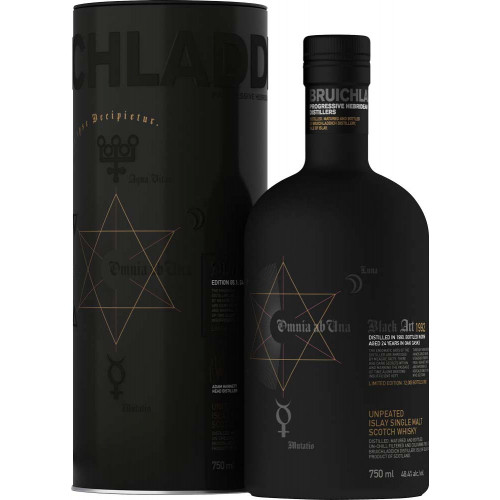 Bruichladdich is an award-winning distillery employing generations of distilling knowledge and the principle of minimal intervention.

Built in 1881 on the wild Scottish island of Islay, our distillery still uses the original Victorian equipment to create a range of single malt whiskies that are trickle distilled, matured and bottled solely on Islay by a skilled team of 78 men and women.

Bruichladdich implements revolutionary, modern interpretations of time-honored ideas and challenges the comfortable conventions of a whisky establishment. Rejecting the onset of modern automation and homogenization, our Head Distiller, Adam Hannett, only considers production methods that place the quality of liquid above everything else.

Diversity starts in the field. Provenance is key. We believe the interaction of man, land, soil and climate is paramount. We value our farmer relationships, reconnecting that lost cycle between farmer and distiller -- land and spirit.

This highly anticipated fifth release of the mystic single malt is just as enigmatic as the last. With the Bruichladdich Black Art 5.1 24 Year Old Single Malt Scotch Whisky, the torch has now passed from retired Master Distiller Jim McEwan to Adam Hannett (now the Head Distiller) who has formulated an entirely new secret recipe. Unlike its predecessor, this fifth expression is more traditional, with less wine influence. Finding the right cask combination is an art of alchemy, and the exact method of this release is kept secret. All that is known is that the youngest whisky was distilled in 1992. It is bottled at cask strength.

"Just before jim retired in 2015 he took me to one side and handed me his recipe for the next iteration, black art 5. it was an emotional moment, the handing over of responsibility of one of the greatest drams we’ve ever created. i have to say i took the recipe from jim’s hand and dutifully ignored it. this had to be my black art.” - Adam Hannett

On the nose are complex, mystifying notes of stewed dark fruits, and polished wood. The palate is creamy, with fruity notes of apricot, and orange peel, and sweet notes of toffee and buckwheat honey. The finish is viscous with wood spice.

On the nose are complex, lavish fruit notes of cherry, mango, apricot,damson and a warming orange citrus all swathed in an oak blanket of soft brown sugar, vanilla and figs dipped in syrup.

The palate is graceful, and through the velvet quality that comes from the age of the spirit, you find damson, mango, pineapple, melon straw-berry, plum and apricot. One after the other they weave in and out of focus on your palate while the structure of the oak gives honey, tobacco, vanilla and hints of spicy cinnamon.

Light stone fruits and a cream texture are a delight with a perfect balance of oak, malt and fruit. Giving way to a a gentle floral mellowness that leaves a lasting impression.