Size750mL Proof80 (40% ABV)
“A truly stunning rum. Its elegance, aromatic charm and flavor may remind you more of a cognac than a premium rum, but a premium rum it is.” -Brugal Rum
Notify me when this product is back in stock. 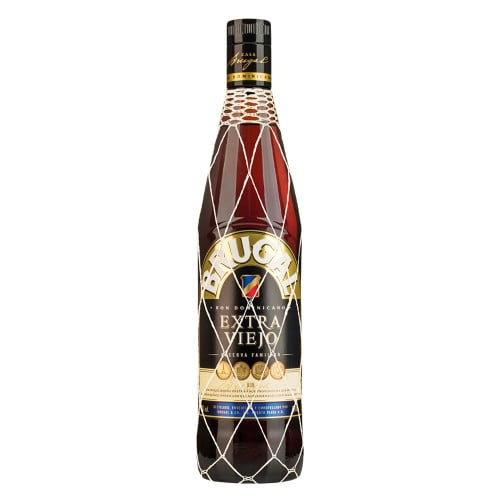 Today, the fourth and fifth generations of Brugal's direct descendants continue to honor the memory of their ancestors by acting as personal guardians of the entire rum-making process at Brugal & Co. Brugal. The Brugal family recipe is a closely guarded secret, preserved in the hearts of a privileged few, passed down from generation to generation.

After going through the distillation process, Brugal Rums are aged for up to eight years in hand-picked American oak casks.

Their casks are hand-picked and evaluated by Brugal’s very own Maestros Roneros. To achieve the perfect character, age and provenance, the most premium oak casks are used to age the rum. From ex-bourbon to ex-sherry.…

The Brugal Rum warehouses are positioned north to south. It is said that this angle makes the most of the Dominican sun from morning to night. This access to the sun intensifying the aging process.

Extra Viejo is bursting with a symphony of wonderfully natural notes of wood spice, orange peel, almonds, cocoa, vanilla, caramel and molasses. The palate has a refined flavor that upon first arrival on the tongue has hints of vanilla, caramel and touches of honey. It is followed by sweet spices and rich cocoa.

This Brugal expression is a “truly stunning rum. Its elegance, aromatic charm and flavor may remind you more of a cognac than a premium rum, but a premium rum it is” (Brugal Rum).

Pick up a bottle of this elegant rum today!

On the nose is a symphony of natural and beautiful notes: wood, dried fruits, almonds, cocoa, vanilla, orange peel, caramel and molasses.The palate has an elegant taste that first arrives with hints of vanilla, caramel and touches of honey. It is followed by sweet spices and rich cocoa. The finish is lingering in the mouth with a peppery finish. A cool feeling to the nose contrasts with warmer notes at the beginning.