Size375mL Proof82 (41% ABV )
“Crisp and snappy like apple cider” this unique brandy is twice distilled from locally sourced apples, and gets its beauty rest for over 5 months in American oak.
Notify me when this product is back in stock. 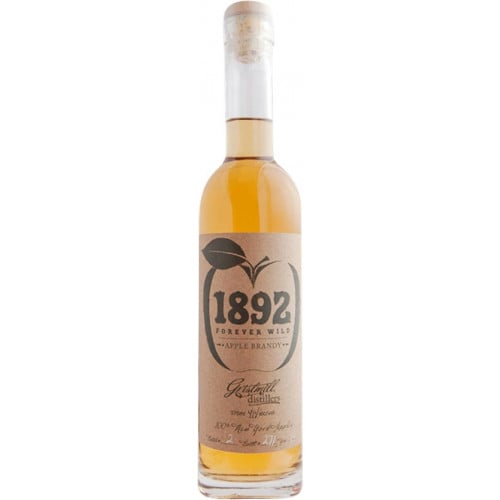 Their corn is grown by Adirondack Organic Grains in nearby Essex, and their brandy apples are grown, picked, and pressed fresh by Rulf’s Orchard, less than thirty-five miles down the road in Peru. Their barrels are made to order from U.S. Barrel, the oldest cooperage in the northeast in nearby Wilmington. Their 1892 Apple Brandy is crafted in the same fashion as most of their whiskies, resting in new American oak barrels after after being twice distilled. 1892 Apple Brandy is an homage to the Gristmill Distillers’ home, Adirondack Park, the largest publicly protected area in the contiguous United States.

The land is further protected by an amendment to the New York State Constitution at the 1894 Constitutional Convention, which declared the park ‘forever wild’. The 1892 Apple Brandy is made with New York grown apples from the Adirondacks mountains.The cider from the apples is freshly pressed by Rulfs Orchard, fermented, distilled, and aged within a 35 mile radius from where the apples are picked. Bottled at 41% ABV this brandy is “crisp and snappy like apple cider.”

Pick up a bottle of this unique apple brandy today!

A floral nose, the palate has a touch of oak. It’s crisp and snappy, much like apple cider but without the lingering sweetness. A bit dry, with a pure flavor.