Learn more
Size750mL Proof80 (40% ABV) *Please note that the ABV of this bottle may vary
Aged for five to seven years, this whisky earned a score of 94 points from the Beverage Testing Institute.
Notify me when this product is back in stock. 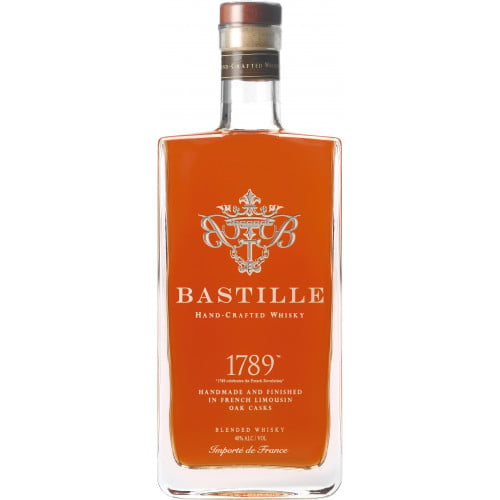 Twice a month, Jean-Marc Daucourt's grandfather would organize Sunday lunches for about twenty people at their home in France. "We would sit for five hours eating, talking and enjoying Champagne, spirits and wine," Daucourt recalls. "This was my first and most important education. I learned the pleasure of entertaining."

Bastille Whisky is made from a mash of malted barley and wheat sourced entirely from northwest France (a number of Scottish distilleries source their grains from the same farms). After the barley and wheat are harvested, they are fermented and distilled through Daucourt's ancient, copper alembic stills. The stills, which were traditionally used to distill cognac, have an odd shape — a tulip-shaped pre-heater feeds the wash into a vase-shaped copper pot, where distillation occurs.

Following distillation, the whisky is aged for five to seven years in a combination of French Limousin Oak, cherry wood and acacia casks. "After the initial maturation," says Daucourt, "Bastille is finished in different styles of wooden casks, which provide my whisky its delicate, harmonious and unique flavors." French Limousin Oak — one of the most expensive types of wood used for barreling — is prized because it is loosely grained and porous, allowing it to impart more flavor and tannins to the whisky that comes in contact with it. The cherry oak barrels, however, impart mild yet complex notes of dark chocolate, cherries and soft citrus, which are complemented by the floral and aromatic undertones from the acacia wood. Following maturation, the whisky is brought to proof with water sourced from the Gensac spring (the water has been naturally filtered for centuries through Grande Champagne limestone) before each batch is bottled.

Bastille 1789 Hand-Crafted Whisky has a light and spicy aroma, with hints of fresh apricots, ginger and chocolate. The initial flavors are sweet, with touches of vanilla, citrus and cherries and are followed by complex notes of cinnamon, baking spices and oak.

Bastille earned a score of 94 points and a rating of "Exceptional" from the Beverage Testing Institute in 2011. In addition, it was named the French Whisky of the Year at the New York Wine and Spirits Competition in 2013.

Twice a month, Jean-Marc Daucourt's grandfather would organize Sunday lunches for about twenty people at their home in France. "We would sit for five hours eating, talking and enjoying Champagne, spirits and wine," Daucourt recalls. "This was my first and most important education. I learned the pleasure of entertaining." When Daucourt was old enough, he left his native France to study the art of distillation in Scotland and Germany. After apprenticing at a number of distilleries, Daucourt returned to France, and together with his brother Edward, purchased a distillery just outside the Cognac region in southwest France. Bastille 1789 Hand-Crafted Whisky is the realization of his dream of creating an outstanding whisky with a distinct French identity.
Explore all Bastille 1789 bottles >>

Light and spicy aroma. Initial flavors are sweet, with hints of vanilla, citrus and cherries. Medium-long finish is spicy, with notes of oak, cinnamon and baking spice.