Caskers Rewards members earn up to 3 store points back when buying this bottle.
Size750mL Proof80 (40% ABV)
This highly anticipated rye from Basil Hayden's is a nuanced, limited edition blend that embodies the best of both worlds: the sweetness of bourbon and the spiciness of rye.
Notify me when this product is back in stock. 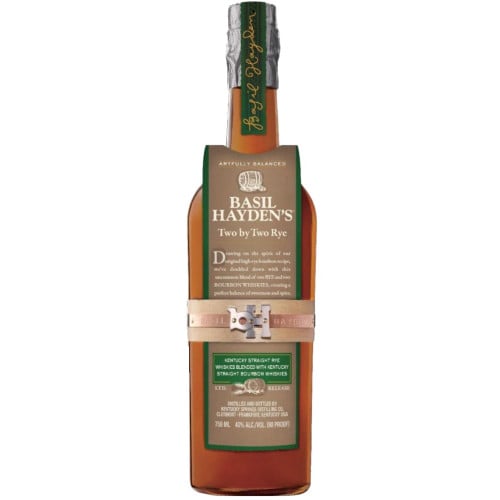 Basil Hayden’s is following up their distinctive Dark Rye (a blend of Canadian and Kentucky ryes with port wine) with a unique hybrid whiskey, a limited edition blend of four separate Kentucky whiskeys. Two by Two Rye is comprised of two bourbons—one aged for 6 years and one aged for 13—and two Kentucky straight ryes—one aged for 5 years and the other 7 years. Although the blend’s exact recipe and proportions are not disclosed, the majority of the blend is rye. This highly nuanced, balanced blend embodies the best that both types of whiskey have to offer: the sweetness of bourbon and the spiciness of rye.

Part of Booker Noe’s Small Batch Bourbon Collection, Basil Hayden’s Kentucky Straight Bourbon Whiskey is named after Basil Hayden Sr., a Maryland Catholic who led twenty-five other Catholic families from Maryland to Nelson County, Kentucky (near Bardstown, home of the Jim Beam) in the late 1700s. In addition to being a religious man — Hayden established the first Catholic church in what is now the Commonwealth of Kentucky — Hayden was also a distiller and a pioneering one at that. While most bourbon at the time was made from a traditional corn base, in 1796 Hayden defied convention by mixing small grains into his mash, believing that the spicy rye flavors would provide a striking complement to the corn’s sweetness. Much to the chagrin of the traditionalist set, Hayden proved to be right.
Explore all Basil Hayden's bottles >>