Size750mL Proof83.6 (41.8% ABV) - May vary
"Mosto Verde,” which translates literally to “green must” in Spanish, refers to the distinct technique used that involves distilling the wine before the fermentation is complete, in order to preserve the fresh, floral aromas of the grape. BarSol Mosto Verde is crafted in small batches, and distilled using 100% Italia grapes from the Ica Valley.
Notify me when this product is back in stock. 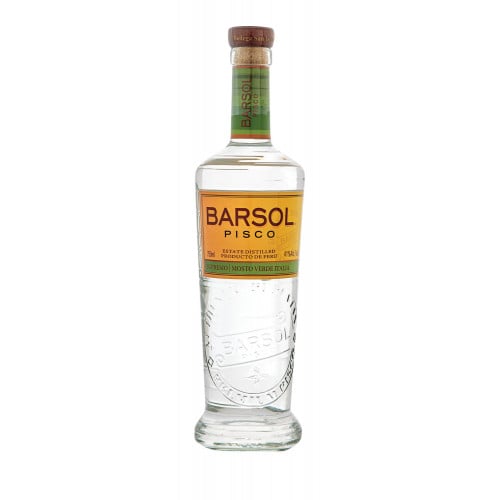 Pisco is a special kind of brandy, distilled from fresh wine fermented from Pisco grapes. The original grapevines were brought over by the Spanish Conquistadors in the 1500s, from the Canary Islands. Pisco became the spirit of choice for Peruvian Viceroyalty since the Inca Empire. The first written historical record dates back to 1613 when Pedro Manuel the Greek, included in his final will and testament, several containers of the spirit, as well as the copper alembic used to produce it. Distilling Pisco became a very commonplace practice in Peru in the 17th and 18th centuries, intensifying after 1641, when the King of Spain, Philip IV, banned the import of Peruvian wine into Spain.

The history of Bodega San Isidro can be traced back to the 1800s. The most remote documents retrieved from the local town archives date back to 1919 when Bodega San Isidro and a series of plantations were purchased as a part of a single transaction. Over several years the distillery changed hands several times. The last owner of Bodega San Isidro before 2002 was the Mendiola Family, who had owned the property since 1940.

The facility also mothballed in 1968, when the military government expropriated all the land from their owners and handed it down to the workers, who subsequently formed agricultural co-ops and essentially killed the vineyards in order to grow subsistence products. In 2002, private entrepreneurs lead by Carlos Ferreyros S. and Diego Loret de Mola acquired Bodega San Isidro, located in the Valley of Ica, District of Pueblo Nuevo, Ica – Peru.

BarSol specializes in piscos produced with Quebranta, Italia and Torontel Grapes. They are produced in both straight pisco and Mosto Verde Pisco styles. An “Acholado” pisco is also made, from a blend of piscos from the 3 single grape varietals. Staying true to the artisanal style of a 100-year-old distillery, the award-winning facility has been revamped and expanded. Their two copper stills, dating back to the 1800s, were re-conditioned, introducing modern technology like Italian de-stemmers and pneumatic presses, to elevate the quality of the distillate.

In 2005 Bodega San Isidro became the top exporter of Pisco of Peru, being the first company ever to export one solid 20’ container of Pisco in Peru’s history, forging pathways to international markets. BarSol Pisco Supremo Mosto Verde Quebranta, BarSol's flagship Pisco, is produced and bottled in one of the oldest distilleries in the Ica Valley, from the wine of 100% Quebranta grapes from the Valley of Ica. Abiding by the classic pisco pot distillation techniques used for centuries in Peru, BarSol Mosto Verde is an artisanal pisco crafted from only the best selection of Quebranta grapes from the Valley of Ica.

"Mosto Verde,” which translates literally to “green must” in Spanish, refers to the distinct technique used that involves distilling the wine before the fermentation is complete, in order to preserve the fresh, floral aromas of the grape. The Italia grapes used are fermented to 3-5% ABV, then distilled and bottled uncut at precisely 82.6 proof.

Pisco is a type of brandy that is distilled in Peru and Chile using grape juice. BarSol is the premier artisanal pisco from Peru. Distilled at the Bodega San Isidro from the pisco grapes of the Valley of Ica, it's the brainchild of Diego Loret de Mola and Carlos Ferreyros. BarSol uses the classic pisco pot distillation method traditionally practiced in Peru since the 16th century. Hand-crafted in small batches and estate-bottled, BarSol is bottled at proof. The grape juice is fermented into wine before being distilled, creating an exceptional spirit of exquisite purity, clarity, and smoothness. Bodega San Isidro is built on decades upon decades of tradition, having been established in the 1800s.
Explore all BarSol Pisco bottles >>

On the nose are light notes of fresh cream and white chocolate, with light hints of caramel and almond. On the palate these flavors intensify with gentle hints of spice.  It is complemented with a rich and round texture similar to light butterscotch.  It is a remarkably balanced with a subtle yet elegant finish.