Learn more
Size750mL Proof112.6 (56.3% ABV) *Please note that the ABV of this bottle may vary
Balcones Texas "1" Single Malt is their flagship whiskey and their most awarded expression. Usually, the whiskey is aged in a combination of casks, but this Carskers-Staff barrel pick has spent 4 years in its new American oak barrel.
Notify me when this product is back in stock. 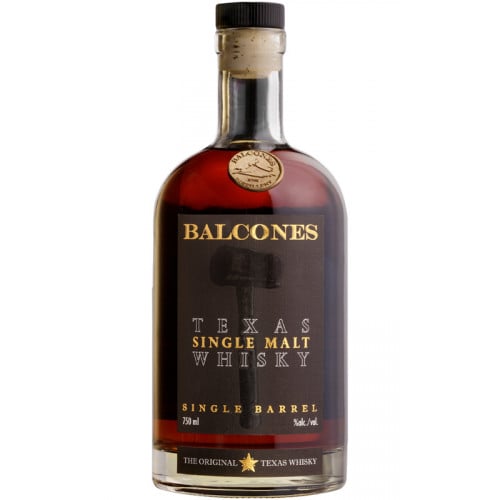 After mashing the malted barley, they slowly ferment it at cool temperatures for seven days. Their fermentation process, which takes nearly twice as long as most other distilleries and is done at much lower temperatures, ultimately produces a richer, smoother whisky. After distillation in pot stills, they age the whisky using a unique barreling process. "The main difference between Balcones and other single malts," they explain, "is the barreling. The cooperage we use and the care we put into blending and reblending the casks defines a lot of what makes our malt what it is. All of the barrels used are bespoke casks made from fully yard-aged oak with custom toast and char profiles."

This expression is a Carskers-Staff barrel pick. It's a showcase of their attention to detail that starts with the selection of grains and continues with the meticulous selection of barrels. Normally, their Texas "1" Single Malt is aged in a combination of new & used American, French, and Hungarian oak casks. This one spent its 4 years in a new American oak barrel ― the same kind that is known for bringing sweet notes to bourbon.

Situated in Texas where the extreme and rapid temperature swings make the barrels "breathe" much faster, Balcones Distilling started as a passion project in an old Texas weldin shop in 2009. Today, this is one of the most unique, grain to glass craft distilleries out there. Using only the best of ingredients from blue corn grown in New Mexico to the first malted barley grown in Texas and handmade Scottish Forsyths copper-pot stills, Balcones pays special attention to the barrels. They consider oak to be an ingredient in whisky as well and their barrels are all customized. Balcones whisky is aged in several barrel types for a more complex flavor profile. Besides Balcones whisky which is adored for its bold and intense flavors, they also make rum.
Explore all Balcones bottles >>

The nose has ripe stone fruit, banana, and pear notes, followed by honey, citrus, and floral aromas. The palate is silky-smooth with toasted bread, butter, and marmalade, culminating in a long finish with toast, burnt sugar, rich malt, and wood, balanced by a touch of acidity.