Size750mL Proof94 (47% ABV)
Lineage is a marrying of the traditional Scotch Single Malts that have long been an inspiration for innovative approaches to grain and maturation to celebrate Texas provenance. 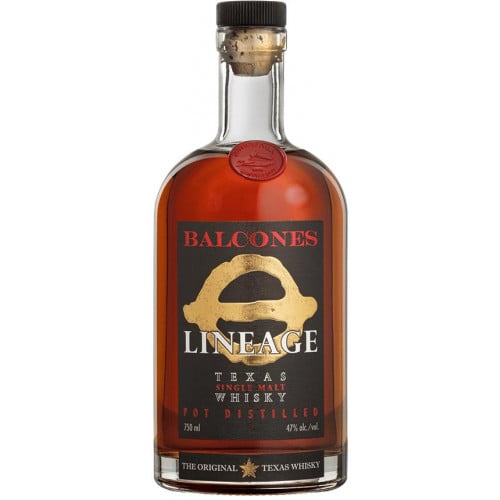 For Balcones Distilling, creating the perfect Texas Whisky is a labor of love. After the whisky has reached its peak of maturity, it is slowly proofed by hand. Each batch of Balcones Single Malt is then bottled and labeled with the type of wood in which the whisky was finished.

Balcones Lineage is made from malted Scottish Golden Promise barley and Texas barley grown in the High Plains. Golden Promise is an early-maturing spring barley that has a depth of flavor ideal for single malts. While it was popular in Scotland for many years, it gave way to cheaper barley that was higher in yield but lower in quality. The whisky is then aged in both refill and new oak barrels, Lineage celebrates both old and new traditions.

Additionally, Lineage matured in both used oak barrels as is typical in Scottish single malt production and virgin charred oak barrels which is more traditional for American whiskeys. Lineage is expected to be available year-round with availability beginning as of August 2020 in Texas, California, Colorado, Georgia, Minnesota, New Jersey, New York, and Oklahoma. Additional markets are expected to follow in 2021.

Situated in Texas where the extreme and rapid temperature swings make the barrels "breathe" much faster, Balcones Distilling started as a passion project in an old Texas weldin shop in 2009. Today, this is one of the most unique, grain to glass craft distilleries out there. Using only the best of ingredients from blue corn grown in New Mexico to the first malted barley grown in Texas and handmade Scottish Forsyths copper-pot stills, Balcones pays special attention to the barrels. They consider oak to be an ingredient in whisky as well and their barrels are all customized. Balcones whisky is aged in several barrel types for a more complex flavor profile. Besides Balcones whisky which is adored for its bold and intense flavors, they also make rum.
Explore all Balcones bottles >>