Size750mL Proof70 (35% ABV)
Aged in charred American oak barrels, this gluten-free rum is blended with natural flavors and spices. Bold and smooth, it strikes the perfect balance between light and deep notes. 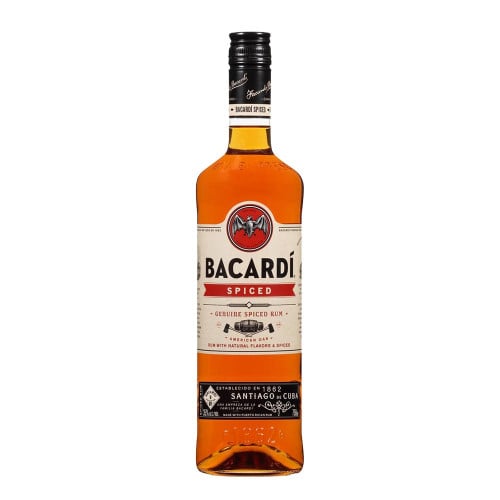 Bacardi Spiced Rum starts with a rum that was aged in charred American oak barrels. A gluten-free rum, it’s blended with natural flavors and spices to achieve a distinct bold and smooth taste on the palate. Expect a striking balance between the light and deep notes – ideal for mixing spiced rum cocktails. Bottled at 70 proof, it greets with typical vanilla and cinnamon on the nose before the sweet and spiced flavors further develop on the palate, rounding up with black pepper and fudge. Great paired with cola or ginger beer.

The nose greets with aromas of vanilla and cinnamon. The palate is sweet and spiced with creamy vanilla, woody and subtle honey notes. The finish is complex and brings flavors of black pepper, fudge, cinnamon and nutmeg spice.