Size750mL Proof80 (40% ABV)
Bacardi Añejo Cuatro Rum is a blend of rums that were aged for at least 4 years under the Caribbean sun. Named Cuatro after the age statement and bottled at a pleasant 80 proof, this mild and soft golden rum brings flavors of dark honey and clove.
Notify me when this product is back in stock. 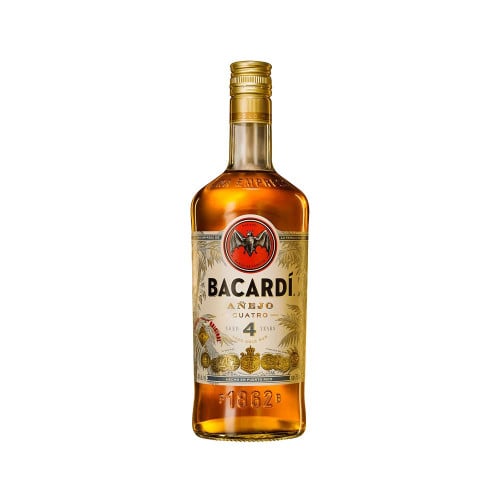 Crafted by Maestros de Ron Bacardi, Bacardi Añejo Cuatro Rum is a blend of rums that were aged for at least 4 years under the Caribbean sun. Named Cuatro after the age statement and bottled at a pleasant 80 proof, this golden rum greets with a nose of vanilla and cinnamon, echoing on the palate together with dark honey and clove. The finish is soft with toffee and oak notes.

The mild nose greets with vanilla and cinnamon. The palate brings flavors of dark honey and clove. The finish rounds up with toasted oak and toffee.