This product is available in: CA, CT, NY, ND Unfortunately, we can't ship to PO Boxes and APO addresses.

Size750mL Proof80 (40% ABV)
This cachaça is distilled from sugarcane from a family-owned farm near Rio de Janeiro. After spending one year in tapinhoã wood casks, it was finished in Hardy Cognac casks for 6 months. Only 600 bottles of this expression from Avuá's Limited Wood series were produced.
Notify me when this product is back in stock.

This product is available in: CA, CT, NY, ND Unfortunately, we can't ship to PO Boxes and APO addresses. 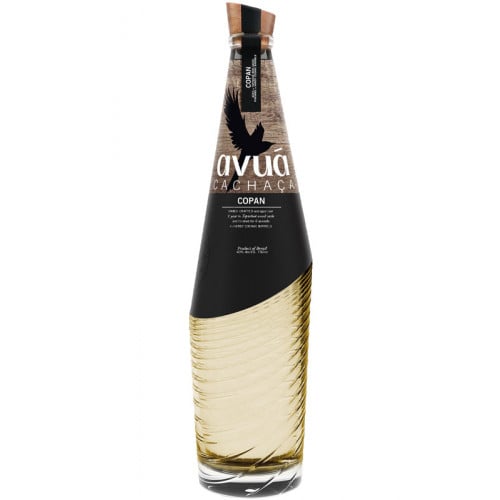 Distilled in the hills of Carmo, near Rio de Janeiro, Avuá Cachaça has made its name with a lineup of tasty sugarcane spirits. Cachaça is the most popular spirit in its Brazillian homeland, and Avuá's lineup has recently grown to include the Copan, a special-edition bottling and the first release from their Limited Wood series. The project started as an experimental collaboration with Hardy Cognac and Craig Schoettler of MGM Resorts. After being distilled from single-estate sugarcane from a family-owned farm, the spirit was initially matured in tapinhoã wood casks for a year before being finished in Hardy Cognac casks for 6 months. With a total yield of only 600 bottles, this is a rare and one-of-a-kind expression that will never be reproduced.

Get one of only 600 bottles today!

During the 17th century, the Madeira archipelago (situated about 200 miles north of the Canary Islands off the coast of Africa) was a major exporter of sugar and sugar cane to much of Portugal and Western Europe. As Algerian pirates began raiding European cargo ships in the late 18th century, however, and Napoleon plunged Europe into a series of wars beginning in 1803, the waters off the coast of the Madeira archipelago became too dangerous to navigate. As a result, the production of sugar cane, as well as cachaça — a spirit distilled from sugar cane — shifted from Madeira to Brazil. Since then, cachaça has become the most popular spirit in Brazil and the third most popular spirit in the world.

Avuá Cachaça is made from 100% estate-grown sugar cane harvested from a small town situated just three hours outside of Rio de Janeiro. The sugar cane is grown on the town's sharp slopes in an intense, subtropical environment, and is hand-cut by local farmers before being crushed using a waterwheel-powered grinder. The sugarcane juice extracted from the grinder is then strained and fermented using local airborne yeast into a wash called garapa (garapa is used figuratively to mean "a good thing.")
Explore all Avuá Cachaça bottles >>

The nose is fresh with green, citrusy, floral, and funky aromas. The palate is sweet with caramel, honey, fruit, pine, peppery spice, cinnamon, and toasted coconut that lingers through the finish with a touch of dried fruit.