Size750mL Proof92 (46% ABV)
This summery Speyside single malt won a Double Gold medal at the 2016 San Francisco World Spirits Competition.
Notify me when this product is back in stock. 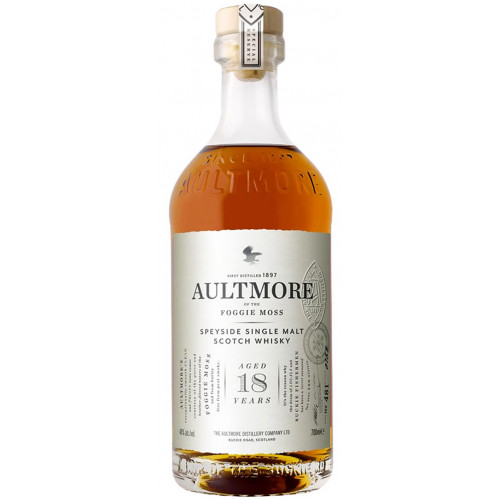 Aultmore has large scale production -- reaching over 2 million liters per year. Their whiskies, generally being produced for blends, made single malts production fairly rare, other than the intermittent independent bottling. After experimenting with an in-house single malt offering they released their first official bottling in in 2004; a 12-year old. Since then they have released several age statement expressions, a flora and fauna release, and rare malts release.

This 18-year-old Speyside single malt is aged for 18 years in American white oak casks. With its honeyed and herbaceous notes, this summery spirit won a Double Gold medal at the 2016 San Francisco World Spirits Competition. Bottled at 46% ABV.

The Aultmore distillery was founded in 1895 by Alexander Edward, then-owner of the Benrinnes distillery. Situated in Keith Banffshire, this Speyside distillery gets its name from the phrase An t-Allt Mòr, which is Gaelic for big burn, referring to its water source, the Auchinderran burn.

Originally powered by a waterwheel, the facility quickly evolved to incorporate a steam engine, which ran 24 hours a day for seven decades. After being expanded in 1899, and experiencing a brief meteoric rise, the distillery abruptly went bankrupt and was eventually shut down. Aultmore reopened around 1904, only to be closed down once more during World War I due to barley shortages.

In 1923, after the war, Aultmore was acquired by John Dewar and Sons, then changed hands again to Scottish Malt Distillers in 1930, then back to Dewars and Son's subsidiary Bacardi in 1998. Aultmore has a history of forward thinking and innovation, being the first to use the draff (a waste product of whisky production) to use as animal feed. After their malting floors closed in 1968, the distillery was rebuilt in 1970, and a new additional wash and spirit still were incorporated.
Explore all Aultmore bottles >>

Fruit, vanilla, and honeyed aromas on the nose, with malty notes. In the mouth it is oily, and soft with rich sweet notes of fudge, caramel, and sherry, followed by some nutty flavors. A herbaceous backdrop evolves into spice on the palate. The finish is rich and smooth.