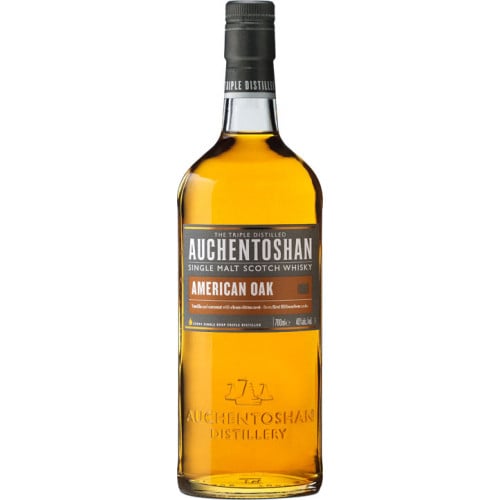 Situated at the foot of the Kilpatrick Hills in Western Scotland, Auchentoshan (pronounced Aw-khen-tosh-an) Distillery was founded in 1800 and is one of the last remaining Lowland Single Malt Whisky distilleries. The distillery is nicknamed "Glasgow's Distillery" due to its proximity to the eponymous city, and its whisky is nicknamed "breakfast whisky" due to its sweet flavor and elegant texture. During World War II, the distillery was bombed relentlessly by Germany, and much of the whisky that was being matured in its rickhouses was lost to fire or spilled into the Clyde River, which is situated adjacent to the distillery. Following the end of the war, the distillery was rebuilt and today, it remains a testament to Scottish perseverance and innovation.

Auchentoshan Single Malt Scotch Whisky is made from malted, optic barley that is gently kilned and completely unpeated. Once the barley has been malted, it is milled and mashed before being fermented in wooden washbacks made from Oregon Pine. While wooden washbacks are more expensive and difficult to maintain as compared to stainless steel washbacks, they retain a portion of the heat produced during fermentation and ultimately produce a lighter and slightly sweeter whisky.

Auchentoshan American Oak Single Malt Scotch Whisky is the first Auchentoshan whisky matured exclusively in charred, American oak casks that were previously used to mature bourbon. Following maturation, the whisky is bottled without the use of chill filtration or artificial coloring.

The whisky has a bright golden color, along with an aroma of bourbon, coconut, and vanilla. The aroma gives way to notes of spiced fruits, citrus, toffee and whipped cream on the palate, and leads to a finish with hints of grapefruits and spices.

Bright golden color. Aroma of bourbon, coconut, and vanilla. Notes of spiced fruits, citrus, toffee and whipped cream on the palate. Finish with hints of grapefruits and spices.