Size750mL Proof25 (12.5% ABV)
First released in 2008, this brut rosé Champagne is a multi-vintage blend of 50% Pinot Noir, 40% Pinot Meunier, and 10% Chardonnay that includes 12% still red wine that comes from particularly fruity old vines, making for a lively and complex wine. 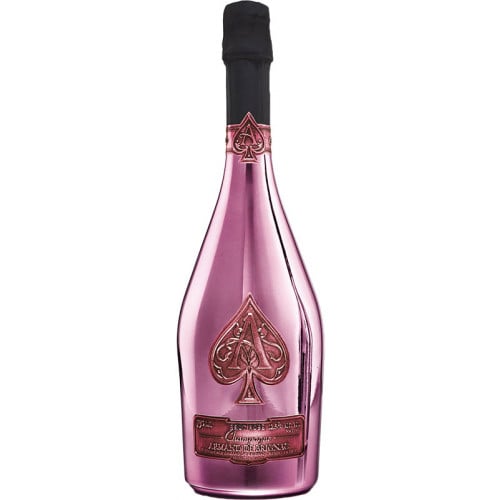 Cattier is a family-owned Champagne House with a rich history dating back to 1625 when the Cattiers first started working their vineyard in Chigny-les-Roses, a village in the Montagne de Reims. After Jean Cattier was wounded in World War I, he returned home and started selling the first bottles of Champagne. By the 1950s and 60s, the House became the largest independent producer in the region, producing 100,000 bottles in a year.

Now in their 13th generation, the company is led by Alexandre Cattier with his cousins Agathe and Marie. Their Champagne celebrated its 100th anniversary in 2018. Their cellars in Rilly-la-Montagne can hold some 2 million bottles and are among the deepest in Champagne, having been excavated in 3 distinct levels with 3 types of arch: Gothic, Roman, and Renaissance.

2006 saw the release of Armand de Brignac, a new brand of prestigious Champagne. Named "the best Champagne in the world" by the Fine Champagne Magazine in 2010, the brand quickly found a solid footing in the industry. Also known as "Ace of Spades," the brand is co-owned by Shawn "Jay-Z" Carter and LVMH Moët Hennessy Louis Vuitton. Armand de Brignac Brut Gold is the flagship offering.

Armand de Brignac Rosé followed 2 years later, in 2008. It's a multi-vintage blend of 50% Pinot Noir, 40% Pinot Meunier, and 10% Chardonnay that includes 12% still red wine that comes from particularly fruity old vines. Lively and complex, it makes for a perfect aperitif, but pairs well with veal, duck, and salmon as well. The bottle is striking to boot!

The nose opens with an abundance of red fruit (strawberry, currant, cherry) with floral and almond hints. On the palate, you'll find dark fruit in the form of cherry, as well as pastry notes. The richness is balanced with the elegant lightness of the Chardonnay.