Learn more
Size700mL Proof104.4 (52.2% ABV) *Please note that the ABV of this bottle may vary
This is Ardbeg history bottled. A liquid testament to the history of chasing perfection.
Notify me when this product is back in stock. 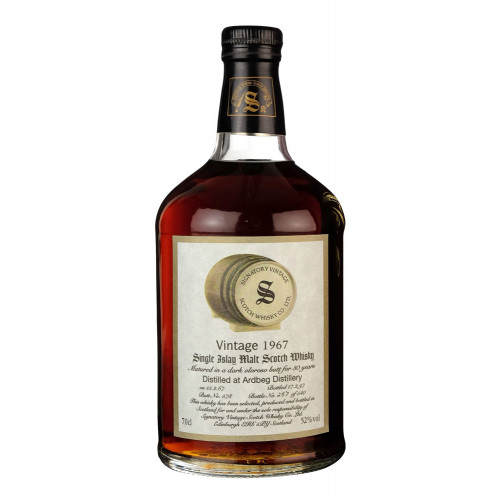 This beautiful Ardbeg vintage rested in dark Oloroso sherry's butts since the first issue of Rolling Stone magazine was released. Only 580 bottles exist peacefully in luxurious wooden presentation cases, waiting for a collector's shelf to crown with its signature 'untamed spirit of Islay.'

Signatory bottled this single malt at 52.2% ABV in an understated bottle to further underline what it's all about — chasing perfection. Ardbeg came so close; there's no tangible line to taste anymore - it's oozing out of every drop. What a wonder.

Ardbeg Distillery, which is situated on the southern coast of Islay, was founded in 1815 by the MacDougall family. By 1886, nearly one-third of the population of Islay worked at the distillery, and today, it stands as a testament to Scottish heritage and tradition.

Grab a bottle of this luxurious scotch today!