Size750mL Proof22 (11% ABV)
After becoming the late-afternoon drink of choice in Italy, Aperol and the famous Aperol Spritz cocktail have taken the world by storm. This gift set contains both a bottle of Aperol as well as Cinzano Prosecco D.O.C., making it the perfect Aperol Spritz starter set. 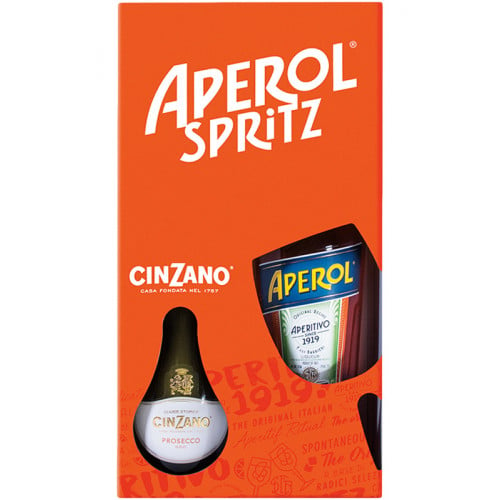 After gaining extreme popularity as an "aperitivo" ― a social late afternoon pre-dinner drink ― in the form of Aperol Spritz, Aperol has taken the world by storm. Its bitter, sweet, and herbal profile is created using a secret recipe with various herbs and roots and its bright orange color makes it instantly recognizable. Mixed with sparkling prosecco and soda water and garnished with a slice of orange, it makes the refreshing Aperol Spritz cocktail that started a craze in Northeast Italy and has since become one of the most popular mixed drinks worldwide.

This gift set contains a bottle of Aperol as well as a bottle of Cinzano Prosecco D.O.C. The latter is a dry sparkling wine that's fresh, fruity, and fizzy with orchard fruit notes. It's the perfect companion to the Aperol. Add equal parts of both into a glass filled with ice, add a splash of soda, and garnish with a slice of orange for the perfect Aperol Spritz.

An interplay of bitter, sweet, and herbal notes defines this liqueur. Orange zest, herbs, and a touch of vanilla on the nose give way to a herbal and woody body with bittersweet and briny notes. Finishes with lingering orange and herbal notes as well as a pleasant bitterness.