Size750mL Proof46 (23% ABV)
First crafted by Stanislao Cobianchi in Bologna, Italy, in 1885, this award-winning amaro is still made using the original secret recipe and production methods. The recipe calls for 40 botanicals from all over the world. 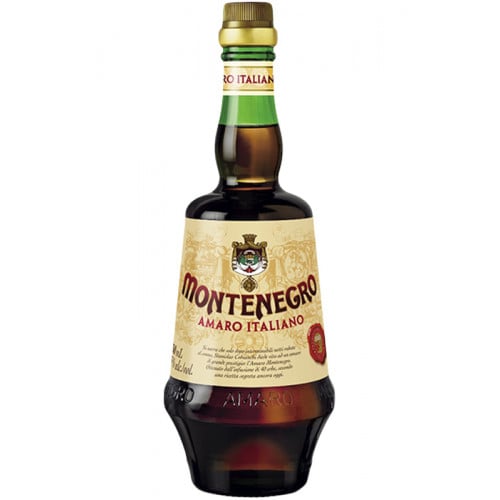 Amaro Montenegro dates back to 1885 when Stanislao Cobianchi crafted an amaro in Bologna, Italy. Originally named Elisivir Lungavita, its secret recipe contained 40 botanicals that Cobianchi gathered from around the world including rinds, woods, seeds, rhizomes, flowers, fruits, citrus peels, roots, stems, and leaves. A decade later the drink was renamed in honor of Princess Elena of Montenegro, who married the prince and later King Victor Emmanuel III of Italy. Cobianchi, being a perfectionist, spent 4 years developing the recipe and designing a unique vial-shaped bottle.

Today, the traditional amaro is produced in San Lazzaro di Savena, a province of Bologna. The ingredients and production process remain the same and only a select few know the exact recipe, the Master Herbalist being one. The secret blend divides the ingredients into 3 groups. Nutmeg, cloves, and cinnamon are there for the sweetness, artemisia blend, marjoram, oregano, and coriander seeds make up the bitter and herbaceous components, while sweet & bitter oranges and petite dried oranges are there for the citrusy notes.

The flavors and aromas are extracted via boiling, maceration, and distillation. 12 essential extracts are produced, then synthesized into 6 tasting notes: bitter & herbaceous, spicy & floral, sweet & roasted, fresh & balsamic, fruity & vegetal, and warm & tropical. The final ingredient is called "premio", a micro-distillation of 5 botanicals that is crafted by the Master Herbalist in secret. Only 1 liter of this mysterious liquid is needed per 15,000 liters of the amaro, yet it brings the mystical finishing touch to the finished product.

Get your bottle of this award-winning amaro today!

It's light and bright with citrus, floral, cinnamon, and cardamom aromas on the nose. The palate is rich with a gentle honey sweetness, spice, floral, and bitter notes. The finish is long with the wormwood bitterness sticking around the longest.