This product is available in: CA, DC, FL, NY, ND Unfortunately, we can't ship to PO Boxes and APO addresses.

Size1420mL Proof12 (6% ABV)
Tanqueray's juniper-forward gin makes for a delicious base of this canned cocktail. Made with sparkling water and natural orange essence, the 6% ABV cocktail is refreshingly zesty and bright.
Notify me when this product is back in stock.

This product is available in: CA, DC, FL, NY, ND Unfortunately, we can't ship to PO Boxes and APO addresses. 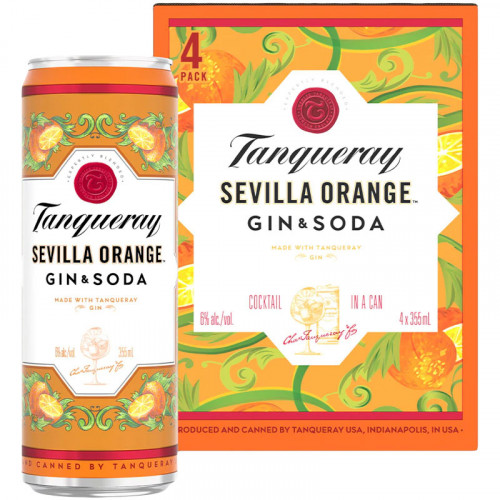 Said to be Frank Sinatra’s favorite gin, the story of the legendary Tanqueray begins with Charles Tanqueray, who founded his distillery on the well-known Vine Street in Bloomsbury, near Picadilly Circus. The origins of the recipe for the legendary London Dry Gin are not well documented, though the general consensus is that the recipe predates 1838. The brand’s uncharted success is very impressive considering the recipe for the gin has remained largely unchanged. Its transcendental popularity is due to Charles Tanqueray and his pioneering spirit. Founding Tanqueray in his early 20s, Charles was barely a novice when it came to distilling, but he brought his brand to great success. When he died in 1868, his son inherited the distillery, continuing his success.

Today, the brand is owned by industry giant Diageo, selling over 2 million cases each year, making it one of the top five selling gins in the world. The standard Tanqueray gin has four botanicals; juniper, coriander seed, angelica root, and licorice. Together they yield a smooth, harmonious juniper-forward gin. Unlike most gins Tanqueray lacks the citrus botanical, making it drier than most gins.

Grab a 4-pack of this zesty canned cocktail today!

This canned cocktail is refreshingly fizzy with prominent orange zest and citrus notes and a super-bright finish with the juniper-forward gin shining through.