Size750mL Proof80 (40% ABV)
Firmly rooted in tradition, this "rakija" is produced in a renovated historic distillery. Each liter of the brandy takes around 35lb of the fruit to produce. Aged at least 3 years in oak barrels, the 80-proof spirit has no additives.
Notify me when this product is back in stock. 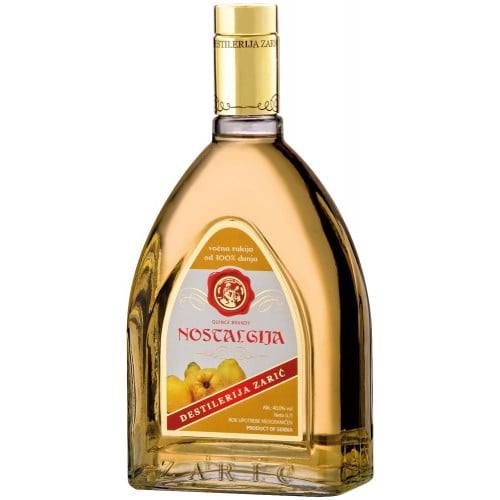 While the family-owned Zarić Distillery was founded two decades ago in the year 2000, its history goes further back. The current distillery is built atop the pillars of the historic Povlen distillery, absorbing both the tradition as well as renovating the old buildings of the once-great operation and elevating it to modern new standards. Located in the town of Kosjerić, Serbia, they craft the popular traditional spirit of the Balkans ― rakija, a brandy that is produced using various different fruits.

Combining Serbian tradition and experience with modern production techniques and science, the distillery now produces around 1 million of rakija each year. While rakija arrived in the Balkans with the Turks in the 15th century, it wasn't until the end of the 19th century that the Kosjerić region started producing the spirit using the various types of high-quality fruits that the region is known for. Using modern pot stills, they craft a wide range of brandy from plum, quince, pears, honey, raspberries, cherries, and apricots.

Zarić Nostalgia is a brandy that is made from quince, a type of pome fruit that is similar to pears. Each liter of the spirit takes around 35 pounds of the fruit to produce. The quince is 100% locally-produced and the redistilled brandy spends at least 3 years in oak barrels. Bottled at 80 proof, this premium brandy has no flavor, aroma, or coloring added and has won several awards.

The nose opens with rich and sophisticated aromas of fruit and wood, as well as floral undertones. It's equally fruity and sweet on the palate with the notes lingering through the finish.