This product is available in: CT, DC, MN, NJ, NY Unfortunately, we can't ship to PO Boxes and APO addresses.

Size750mL Proof80 (40% ABV)
This expression is a blend of Pays d'Auge calvados aged at least 4 years in oak barrels. It adheres to the strict AOC (Controlled Designation of Origin) rules that dictate the terroir as well as the production process.

This product is available in: CT, DC, MN, NJ, NY Unfortunately, we can't ship to PO Boxes and APO addresses. 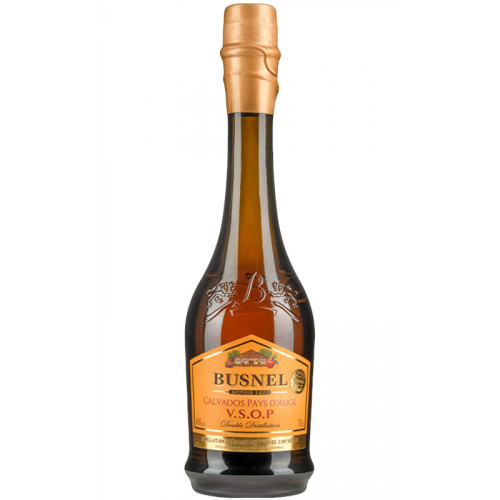 Ernest Busnel settled in Pont l'Evêque in 1820 with his family. He soon developed a love of the land and the famous apples of the Pays D'Auge region, laying the foundation for Busnel Calvados. Calvados is a famous brandy that is produced from apples, sometimes with the addition of pears. Pays D'Auge is the most celebrated region within Normandy, France, where some of the finest calvados in the world is produced. Ernest's son Georges was known for meticulously scouring the Normandy countryside in search of the best eaux-de-vie, saying "No good apples, no good calvados". Georges passed the torch to his son Pierre and in the early 20th century Busnel's reputation was growing rapidly, expanding distribution, eventually becoming the exclusive supplier of the RMS Queen Mary.

World War II left the distillery and all its facilities in ruins and a new distillery opened its doors in 1952, rapidly reaching the success it enjoyed before the war. By the end of the 70s, the distillery had relocated to Cormeilles, expanding considerably. Today, Busnel is the oldest of the major calvados producers, building upon generations of expertise. With terroir and tradition at its core, Busnel looks to a future of innovation and modernity.

Busnel Calvados Pays d'Auge AOC VSOP is a blend of calvados that were aged at least 4 years in oak casks. AOC stands for Appellation d'Origine Contrôlée (Controlled Designation of Origin), which deals with both the terroir and production methods. The Calvados is double distilled using a traditional pot still from naturally-fermented cider in 2 stages, the first distillation taking from 7 to 8 hours, the second between 11 and 12 hours.

Get your bottle of this VSOP calvados today!

The bright amber spirit has a soft nose with ripe apples and hints of toasted oak. The palate is fruity and round with orchard fruit and hints of cinnamon, culminating in a round and elegant finish with lingering spice.