Learn more
Size375mL Proof80 (40% ABV) *Please note that the ABV of this bottle may vary
Made from the early run sap of Vermont maple trees, only 750 bottles of this vodka were produced last year.
Notify me when this product is back in stock. 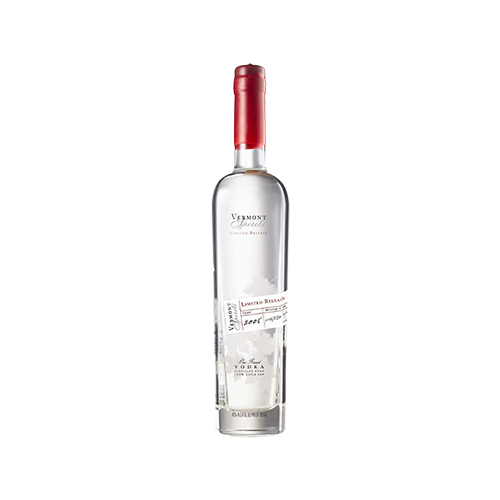 Native to the hardwood forests of New England, maple trees produce an average of nearly four gallons of sap each spring. Just before winter, the trees stockpile starch and sugar in order to survive the freezing nights and short days of New England's harsh climate. As the temperatures warm, the trees convert the sugar into sap, which they begin releasing in a matter of weeks.

In Vermont, master distiller Harry Gorman collects the early runs of the sap produced by the state's maple trees. The early runs — the sap that is released by the tree just after winter — is lighter in color than traditional sap, and has a more delicate and subtle flavor profile. "A very small percentage of the sugar maple's sap output comes in the form of early run sap," says Gorman. "Early run sap is the cream off the top of an altogether wonderfully delicious sugar."

After harvesting the sap, Gorman ferments it slowly using a proprietary strain of yeast at his distillery — Vermont Spirits — situated on the banks of the Ottaquechee River in eastern Vermont. Following fermentation, the vodka is distilled three times using a fractionating column still, allowing Gorman to isolate and separate any impurities and produce an incredibly pure and smooth vodka. After each distillation, the vodka is lightly filtered with charcoal. Then, Gorman and his team of distillers fill and label each bottle by hand. "It takes the early run sap of an entire tree to produce one bottle of this vodka," says Gorman.

Vermont Spirits Limited Release Vodka has subtle notes of maple sugar that aren't overwhelming, and are balanced by a hint of pepper. The light mouthfeel is playful, and compliments the finish, which has a touch of vanilla.

Only 750 bottles of Vermont Spirits Limited Release Vodka were produced last year. "Our goal is to produce vodkas with flavor, not flavored vodkas," says Gorman.

Get a bottle of this flavorful vodka today, or try it in a duo with the excellent Prairie Handcrafted Vodka!

Subtle notes of maple sugar that aren't overwhelming, and are balanced by a hint of pepper. Light, playful mouthfeel compliments the finish, which has a touch of vanilla.