Size750mL Proof80 (40% ABV)
Made entirely from locally grown corn, this vodka earned a score of 92 points from Wine Enthusiast.
Notify me when this product is back in stock. 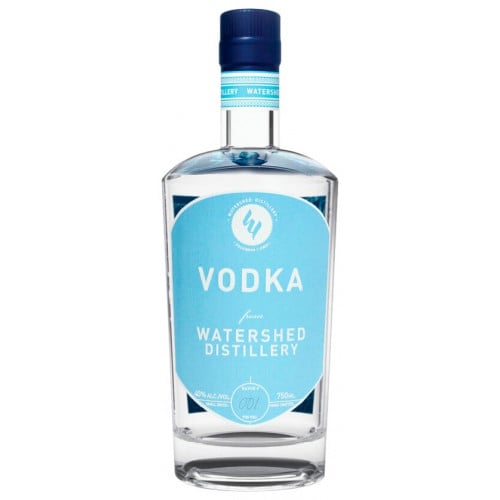 Greg Lehman conceived of the idea of Watershed Distillery, which is situated in the heart of Columbus, Ohio, when he was playing professional volleyball in Switzerland. "Locally produced spirits were common in the area, "he says, and he was inspired to bring the concept back to his Ohio hometown. Together with his cofounder, Dave Rigo, the pair founded Watershed Distillery in 2010.

Watershed Distillery Vodka is crafted exclusively from locally grown corn, which is milled and and mashed before being fermented at the distillery. "Using corn allows a very subtle sweetness to the vodka, but the main attribute is its sheer purity," says Lehman. Following fermentation, the vodka is distilled four separate times, giving the spirit a light body and silky smooth finish.

Watershed Distillery Vodka has an aroma of black pepper, ginger, spices and flower petals that give way to smooth touches of citrus, ginger and black pepper. The finish is smooth and dry, with a touch of creamy vanilla.

The vodka earned a score of 92 points from Wine Enthusiast, which said that it had a "floral aroma and a sweet taste with distinctly citrusy notes and a clean, dry finish."

Aroma of black pepper, ginger, spices and flower petals. Smooth touches of citrus, ginger and black pepper on the palate. Finish is smooth and dry, with a touch of creamy vanilla.