$39.99
Caskers Rewards members earn up to 1 store points back when buying this bottle.

Size750mL Proof90 (45% ABV)
Distilled from two types of dried hops, this vodka is the world's first hopped vodka.
Notify me when this product is back in stock. 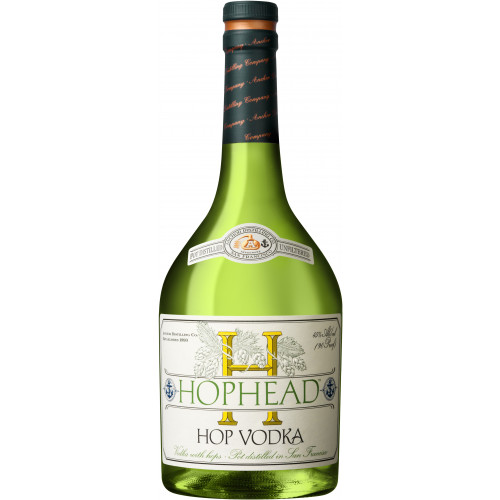 Tucked away in a warehouse near Potrero Hill in San Francisco, Anchor Brewing and Distilling Co. has been handcrafting alcohol for nearly 150 years. Its history can be traced back to 1849, when German brewer Gottlieb Brekle arrived in San Francisco with his family during the California Gold Rush. In 1871, after finding no gold, Brekle purchased a saloon on Pacific Street near Russian Hill for $3,500 and transformed it into Anchor Brewery. Nearly 125 years later, under the aegis of Fritz Maytag — a pioneer of the American craft distilling movement — Anchor Brewery began distilling spirits, giving birth to Anchor Distilling.

After Maytag retired in 2010, David King joined Anchor Distilling and noticed the scent of hops that permeated his new office. Hops are the buds of a climbing vine and are traditionally used in beer as a bittering agent and preservative. Some styles of beer, such as IPAs, use a wide variety of hops while other types, such as stouts, tend to use fewer hops. Similar to other vines, hops have a heady scent that can express itself as grapefruit, oak, or pine, depending on the variety used.

After testing a variety of hops used at Anchor Brewing (located on the floor above Anchor Distilling), King, together with Mark Carpenter, Anchor's brewmaster, and Bruce Joseph, Anchor's master distiller, settled on two varieties of dried hops in order to produce Hophead Hop Vodka.

Distilled through small, copper pot stills, Hophead Hop Vodka has a sublime flavor reminiscent of stout beer. The hops — sourced from Washington's Yakima Valley — impart a clean, assertive character to the vodka, without the bitterness typically associated with hops.