Size750mL Proof80 (40% ABV)
This luxurious whey vodka is crafted from crystal clear New Zealand spring water.
Notify me when this product is back in stock. 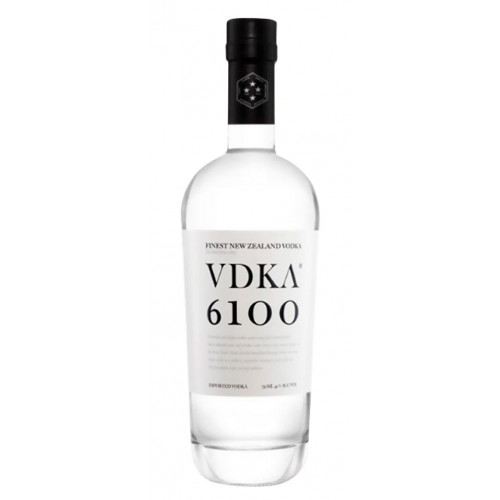 VDKA 6100 is the passion project of Australian Casino owner James Packer and Robert De Niro. VDKA 6100 was launched in 2014 at the TRIBECA Film Festival, eventually becoming the official Vodka of the event.

VDKA 6100 is very unique in that it is made from crystal clear New Zealand spring water and whey (a by-product of milk production) derived from organic, grass-fed, New Zealand dairy cows. This unique base is only used by handful of distillers to make spirits. VDKA 6100 is one of the largest scale producers of whey spirit. This gluten-free vodka is clean on the nose with notes of citrus, followed by an incredibly dry finish. Enjoy in a classic Martini with sweet vermouth and a lemon peel.

Subtle vanilla and citrus on the nose. The palate is creamy with lemon, sweet vanilla, and a dash of pepper. The finish is clean and dry.