Learn more
Size750mL Proof80 (40% ABV) *Please note that the ABV of this bottle may vary
With Grey Goose signature winter wheat vodka serving as the base, this 80-proof expression benefits from anjou pear essential oils, making for a natural and pure expression. Fruity, smooth, and crisp, it's a premium flavored vodka that is delicious on its own or in cocktails. 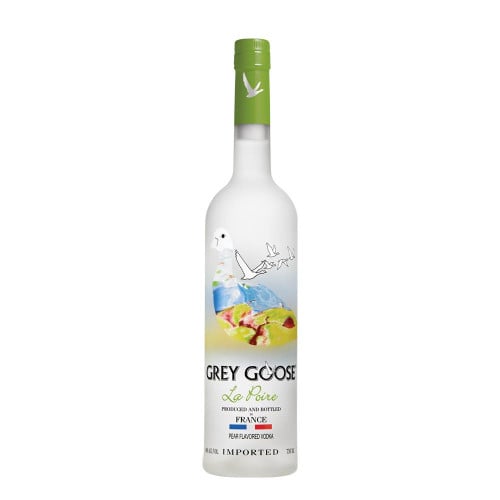 The water used in production comes from the natural spring, Gensac-la-Pallue, in the Cognac region, where it gets filtered through Champagne limestone. Grey Goose is crafted with locally sourced soft winter wheat grown in Picardy (known as "the breadbasket of France"), a wheat-growing region in France. The grain is sown in October and harvested in August. This wheat, classified as "superior bread-making wheat," is the only grain used in Grey Goose. According to Thibault, soft wheat, as opposed to hard wheat, is better for distilling, the four additional months of growth in comparison to summer wheat yielding a more durable grain.

Grey Goose has several flavored expressions in their lineup, all of them crafted with their soft winter wheat vodka serving as the base. Grey Goose La Poire is a fruity pear-flavored vodka that is crafted with anjou pears, a staple and classic of French cuisine ― especially pastries and desserts. Launched in 2007, this crisp, smooth, fruity, and floral 80-proof expression is made with essential oils, making for a natural pear taste that is pure and complex.

Grab a bottle of this premium pear vodka today!

Aromas of orchard fruits are on the nose with ripe pear being the star of the show. The palate is pure, crisp, and clean with plenty of fruitiness, floral notes, citrus, and hints of spice. The finish is crisp and fruity with a touch of black pepper and nutty undertones.